Story 68 - Planet of the Daleks 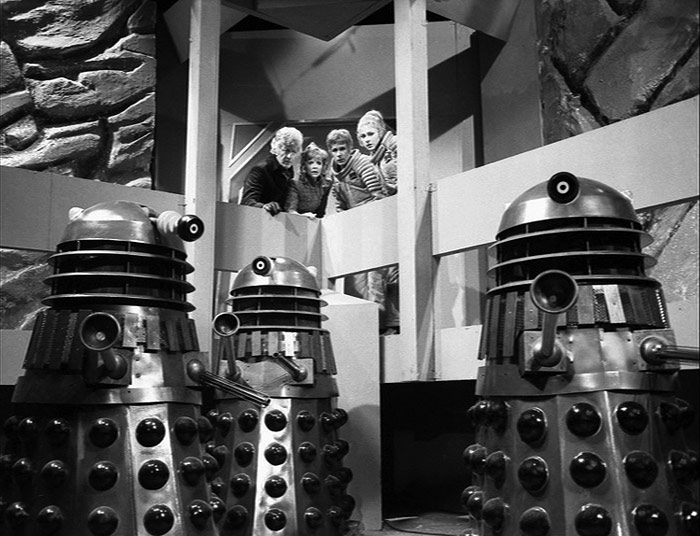 In which the Time Lords direct the TARDIS to the hostile world of Spiridon in pursuit of the Daleks. After being injured in his struggle with the Master, the Doctor is in a coma. After the ship materialises, Jo goes off to find help - recording events for the Doctor's benefit on a small recorder. Plants spit a green liquid at her, and then start to cover the TARDIS. Jo finds a crashed spacecraft and its dead pilot. She meets the rest of the crew - Thals from the planet Skaro, led by Taron. With him are Vaber and Codal. She must remain on the ship whilst they go and collect the Doctor. As she hides, an invisible being enters and looks around. She discovers that the plant venom has infected her with a deadly fungus and collapses. The Doctor, meanwhile, has recovered but found himself trapped in the TARDIS with the air running out. The ship has been covered in plant fungus, but the Thals arrive and free the doors and release him. As they travel to the Thal craft, they encounter a defunct Dalek which has been rendered invisible. Taron explains that his group have come here to destroy a Dalek outpost, and the Daleks are experimenting with invisibility - inspired by the native beings. One of the Spiridons captures Codal. They wear large purple cloaks in order to be seen. When they get to the craft, they see it surrounded by Daleks. The Doctor is wounded and captured, and watches as the ship is destroyed with Jo still onboard. 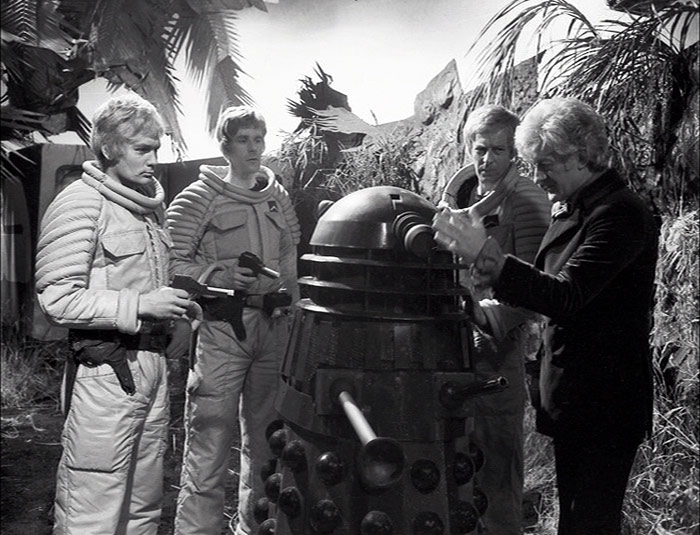 Jo has actually been rescued by a friendly Spiridon named Wester, and he has cured her of the plant fungus. The Doctor finds himself imprisoned with Codal, and they set about finding a way of escaping. As he is trying to find a way out of the base, Jo is  trying to find a way in to rescue him. A second Thal craft crash-lands. The survivors are Rebec - who is Taron's lover - Latep and Marat. They have come to warn Taron that they have learned of an army of Daleks on Spiridon - some 10,000 strong. The Thals break into the base using tunnels through which liquid ice vents, and are reunited with the Doctor and Codal. Marat is killed. Trapped in the lowermost level of the complex, they find a massive refrigeration unit and a cavern containing the Dalek army - currently in suspended animation. Everyone escapes back to the jungle, the Doctor being reunited with Jo, and they make for the Plain of Stones as night falls. Here, the boulders trap heat during the day and emit it at night, like storage heaters. Vaber goes off on his own to attack the base but is captured and killed trying to escape. The others devise a plan to break into the base and destroy the Daleks. 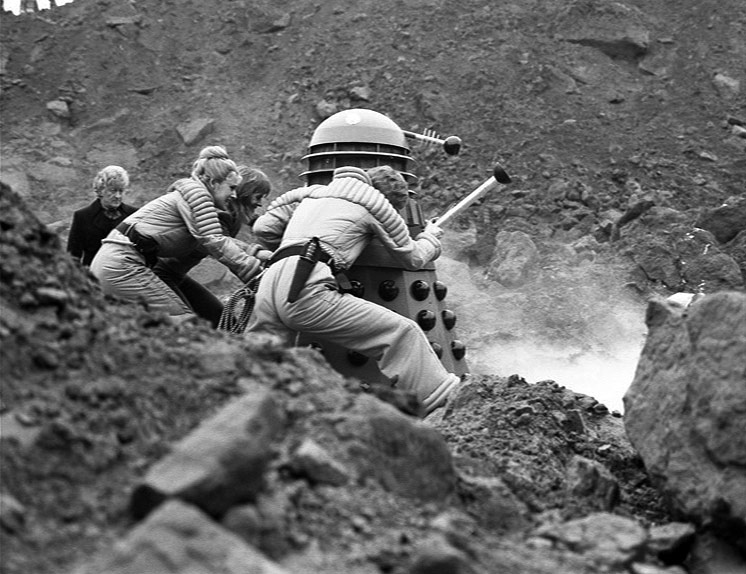 Some Spiridons will be overpowered in order to get hold of their cloaks, and a Dalek patrol is pushed into an ice pool - the shock killing the mutants within - in order to obtain an empty casing. Thus disguised, they get back into the base. Wester sacrifices himself to stop the Daleks from releasing a deadly virus into the jungle which would kill all unprotected life. One of the Dalek Supreme Council arrives to take charge. It is much larger than its minions, with black and gold livery. The Thals have one bomb remaining, and it is used to break through a wall to release a torrent of liquid ice which floods the cavern - covering the Dalek army just as it was being reanimated. The Daleks abandon the base, and the Thals steal the Supreme's ship in order to get back to Skaro. Latep has developed a crush on Jo, but she declines his offer to go with them. She has the Doctor take her back home to Earth instead. 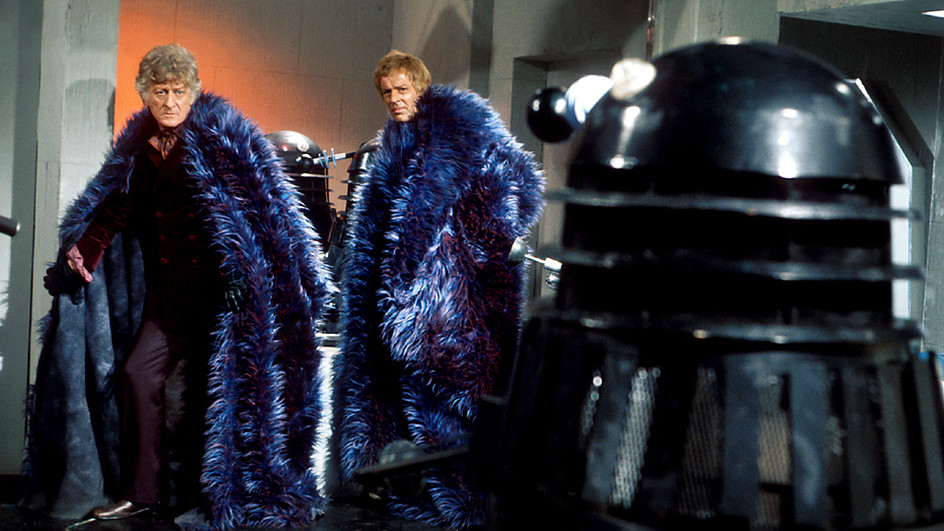 This six part adventure was written by Terry Nation, and broadcast between 7th April and 12th May, 1973. It forms the second half of an epic adventure to mark the Tenth Anniversary of the programme. Malcolm Hulke's Frontier In Space had formed the set up - providing the backdrop to events seen here and introducing the Daleks as the architects of an interplanetary war.
Despite asking the Time Lords to go after the Daleks, the Doctor seems very surprised to come across one on Spiridon - unless he is either shocked by their invisibility or his earlier injuries have affected his memory.
Terry Nation dips into his bag of Dalek writing tricks for this story - jungle planet, hostile plants, invisible creatures. The Thal leader's name derives from his own (Terry N) and Rebec from his daughter.
The first Dalek story is directly referenced, the Doctor telling Taron that he was there on Skaro with Ian, Barbara and Susan. The scene with the Dalek pursuing them up the shaft mimics the lift scene in part four of that first story. Someone has their legs paralysed by the Daleks, and someone hides in an empty casing.
Nation still has a lot to say about pacifism and bravery, again mirroring dialogue from The Daleks. There are three quiet scenes when the Doctor discusses these issues, and the possible glorification of war, interspersed through the story. 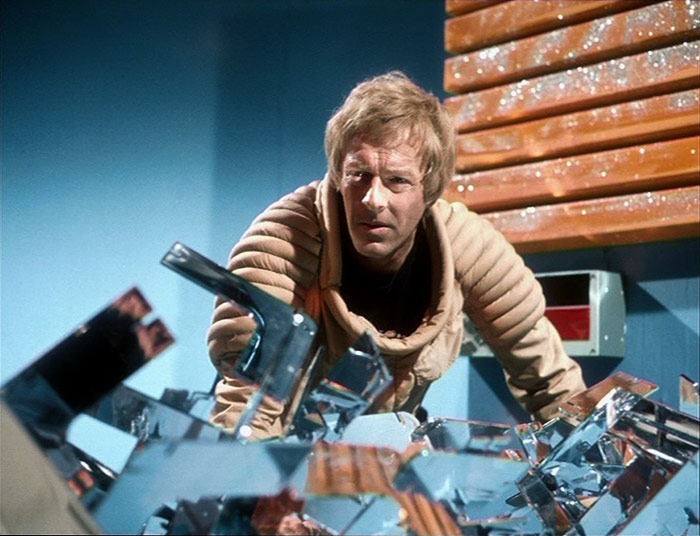 Michael Wisher again provides the Dalek vocals, as with the previous story. The Daleks are a dark grey colour, but you will see slight variations. There are several static dummies, and the one which was spray painted black earlier has recovered enough to appear later in group scenes in the base.
Wester is played by Roy Skelton (providing other Dalek and Spiridon voices) and he gets an on screen appearance as Wester dies after releasing the Dalek virus in the lab.
Bernard Horsfall plays Taron - all quiet determination. His love interest, Rebec, is played by Jane How. Prentis Hancock plays Vaber as a rebellious and dangerous hothead. Tim Preece's Codal is the exact opposite. His scene with Pertwee in the cell where they discuss the nature of bravery is a highlight. Alan Tucker's Latep (an anagram of petal - just about sums him up) is a bit wet, and you can see why Jo chose to hold off for a Doctor surrogate figure to pin her affections on.
Episode endings for this story are: 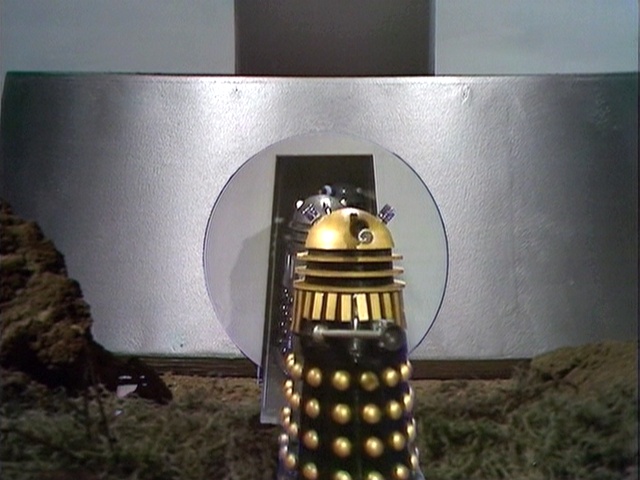 Overall, a very fine Dalek story - the best of their Pertwee era appearances. Bernard Horsfall gives an excellent performance. It's a good story for Pertwee, less so for Katy Manning as Jo gets sidelined after the first episode.
Things you might like to know: