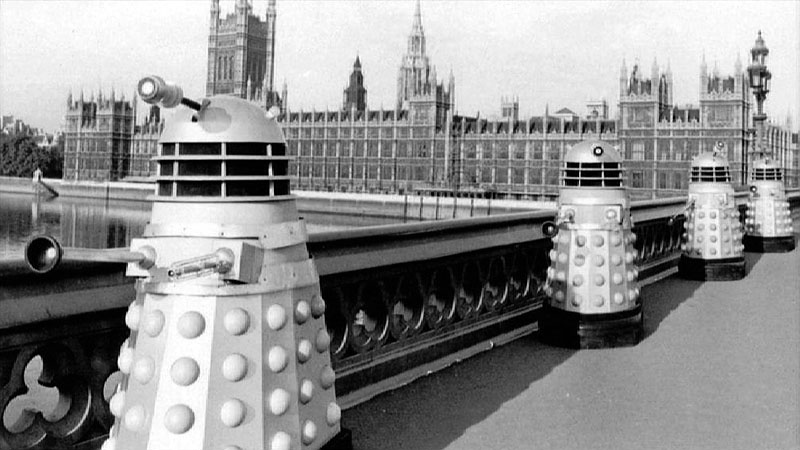 The Dalek Invasion of Earth.
My third landmark story is significant for a number of reasons.
Firstly, it features the second appearance by the Daleks, of course - the first time that a monster has returned to the programme. It was always on the cards that it would be the Masters of Skaro - rather than the Voord or the Sensorites. (It's surprising to consider just how few monsters actually appeared in the first year of the show).
Secondly, this is the first ever alien invasion of Earth story - something we are very used to these days, but new then.
Thirdly, this marks the first extensive use of exterior film work. True, the very first exteriors were seen in The Reign of Terror a few months before, but this adventure makes the most of its London landmarks throughout the first half of the tale. It's also one of the very rare occasions when a quarry is actually used as a quarry.
Fourth item of significance is that this story forms the basis for the second (and final to date) Doctor Who cinema film. (Whilst the 50th Anniversary story will get a limited 3D cinema outing, it is still a made for TV venture at the end of the day).
Lastly - but certainly not least - is the first departure of one of the regulars. Not just anyone, but the Doctor's grand-daughter, Susan.
Susan is still a bit of an enigma. The fact that the Doctor seems to forget about her so quickly has led some to postulate that she wasn't actually a blood relative at all. Rather, he had adopted her during his travels and raised her as his relative. In The Five Doctors, the Fifth simply gazes at her for a few seconds, and the Second and Third don't bat an eye-lid. There's no sense of a joyous family reunion.
The "Susan not a real relative" theory fails to explain her knowledge of Gallifrey, telepathic abilities and a number of occasions when she and the Doctor specifically talk about going home - obviously a shared home.  I don't believe for a minute that she invented the name TARDIS. I think what she actually invented was the acronym rather than the word.
Would the Doctor leave a Time Lord to marry a human - knowing that she will outlive him and see everyone else she has ever known and loved die of old age?
My own theory is that one of her parents (maybe even her grandmother) was human - hence the Doctor's love of Earth - and she does not have regenerative abilities.
Posted by GerryD at 20:50