The Power of Three - a spoiler-free round-up 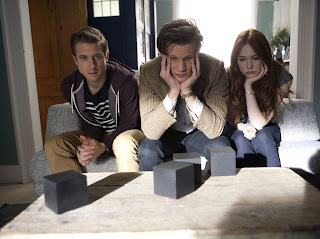 The penultimate round-up of bits and pieces gleaned from around the internet, non-spoilery in nature. As with last week, not a huge amount out there.

This feels at times like an RTD era episode - one of the late in the season, "calm before the storm" stories.
It's very fast paced but not in the action-blockbuster sort of way.
There are also the TV news bulletins, helping sell the global impact of these events, which we haven't seen so much of since RTD moved on - plus some famous folks making cameo appearances.
It's a slow invasion - the action covering about a year.
The cubes, as seen in the trailers, count down to zero.
From the trailers we also know they have some kind of medical impact on people - we've seen people's faces lighting up blue and a couple of Rory's colleagues with funny gaping mouths. Rory's nursing uniform has been prominent in promo images.
The Doctor already knows who's behind the threat.

The resolution to this part of the story is very rushed - it's all over in a blink of the eye and this might leave you feeling a bit of an anti-climax. Some previewers believe this should have been a longer episode.
The guest star playing the alien is Steven Berkoff - and for an actor of his stature he's rather underused. 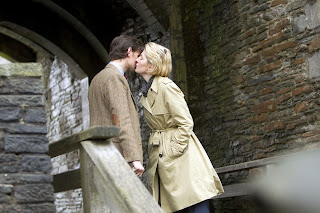 The other guest star is Jemma Redgrave and she has far more prominence. She's UNIT's scientific adviser - Kate Stewart. According to a couple of today's new promo pictures, she and the Doctor look as if they know each other of old?

The main focus of the story is the home life of Amy & Rory, and how it compares to their travels with the Doctor - and this is where the episode really shines. All that cube stuff is just the hook to hang the relationship pieces together - Amy & Rory; and Amy, Rory and the Doctor.
You'll be reminded of Pond Life.
There are lots of little vignettes as we see a year in their life - with the Doctor as lodger, waiting for the cubes to do what they do.
As with other episodes this series, there are aspects of the Doctor that you might not like - he doesn't take to domesticity and the "slow path" very well.
Mark Williams returns and is also very good - Brian's the opposite of the Doctor when it comes to inactivity.
There are lots of little references to the past that will keep us fans very happy - including an appearance, of sorts, for a classic monster.... 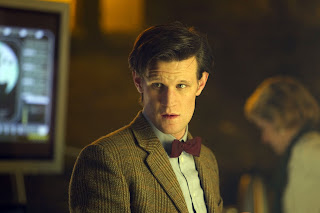