Don't read this if you haven't watched The Asylum of the Daleks yet... 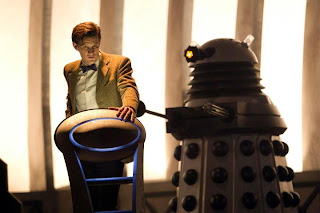 That was something special - 45 perfectly crafted minutes. The big surprise we were promised turned out to be Jenna-Louise Coleman's presence - but was it the new companion? Her character was called Oswin Oswald - but I have read of another name for the companion (reported by people who have observed filming). It will be interesting to see how Moffat handles this come Christmas.
Lots of new Dalek lore. They had a gigantic Dalek statue in the centre of their city on Skaro (not destroyed by the Seventh Doctor, or at the end of the Time War it would seem, though apparently now abandoned by the Daleks).
Human slaves have little eyestalks in their foreheads and guns in their hands. Even corpses can be turned into slaves - one of the programme's scariest horror moments was the skeletal zombies coming to life. I suspect there will be a lot of wet beds by morning.
Daleks find hatred "beautiful" - hence why they kept their mad peers in the asylum - and possibly why they've never killed the Doctor. Their hatred of him keeps them going.
Then there was the chatty Prime Minister - a mutant in a glass tank.
Moffat also managed to hit a reset button of sorts with the Daleks - they no longer know who or what the Doctor is. No more is he the Oncoming Storm. 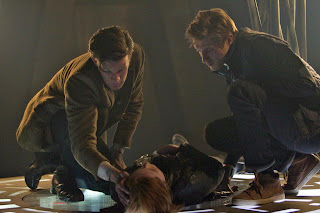 The regulars are all very well served in this. Amy and Rory start with arguments and divorce papers. However, in their conversation on the teleport a lot of long unsaid things emerge. Rory believes that Amy has never loved him as much as he does her.  She reveals that throwing him out was her way of doing him a favour. After Demons Run, she cannot have children, and she knows that he longs for kids.
Rory gets some Dalek action as well as a lot of cracking one-liners. Loved the Eggs bit.
When confronted by the results of his own actions in "Intensive Care" (mentions of Spiridon, Kembel, Vulcan, Exxilon) Smith conveys the Doctor's genuine fear and panic as he is trapped at the door.
The reveal of Oswin's fate I had half-guessed - as we knew JLC wouldn't be joining full time yet. I'll reserve judgement on her for now - as we don't know yet how this character ties with the new companion. 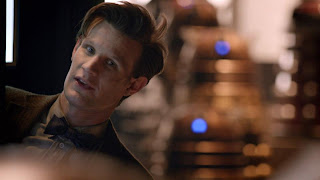 The titles were different only in colour scheme and the way in which the names appeared and dissolved. Nice little touch giving the words "Doctor Who" Daleks spheres. Wonder what they'll do with the dinosaurs...
The special effects were superb - from the opening views of Skaro to the asylum's destruction.
Overall a cracking series opener - one of the best since 2005. The only people who may have come away disappointed would be fans of the Special Weapons Dalek, which needn't have bothered turning up.
Posted by GerryD at 21:43