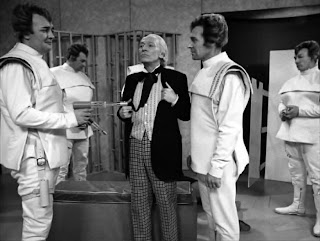 In which  the TARDIS materialises on the planet Xeros, location of a museum celebrating the once great Morok Empire. On leaving 12th Century Palestine, the travellers had become frozen in time. They suddenly find themselves standing in the same places around the console - but are now wearing their everyday clothes. This surprises everyone apart from the Doctor, who shrugs it off as a quirk of time travel.
Vicki goes to get the Doctor a glass of water, and confirms that their medieval costumes are now hanging up in a closet. She drops the glass - and it suddenly jumps up and reconstitutes itself, unbroken, in her hand - as though time has gone into reverse. They see the museum building and various spaceships on the scanner and go outside to explore. It is eerily quiet - and Ian notices that they have made no footprints in the dusty soil. Once at the large museum building, a pair of white-uniformed guards somehow fail to see them. Later, two young men dressed in black, walk right past them - and they find they cannot hear their conversation. Vicki, against the Doctor's instructions, touches an exhibit - and her hand passes straight through it. 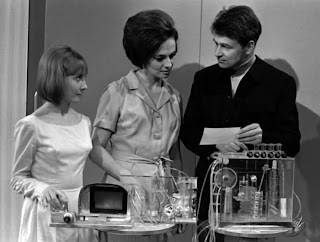 In another room, they come upon the TARDIS - but it too proves to be intangible. Nearby are display cases - featuring themselves as exhibits. The Doctor realises what has happened. Back in the ship they had skipped a "time track" - causing them to arrive here too soon. They are merely future shades of themselves. They will really arrive, materially, soon. A few moments later they experience a strange sensation and realise that time is catching up with them. The exhibits vanish. They have now "arrived" for real - and are at the risk of being turned into exhibits, for they have glimpsed a possible future for themselves. They must do all they can to change that fate. Morok guards find the TARDIS and see footprints leading towards the museum, so notify Governor Lobos. The Moroks were once a great empire-building race, but are now in decline. No-one ever comes here, and a posting to Xeros is seen as a virtual exile. The travellers become separated. After hiding in an empty Dalek shell, the Doctor is captured and taken to Lobos, who interrogates him using a mind-reading chair. This fails as the Doctor plays mental tricks, but he is then sent to be prepared for the museum. 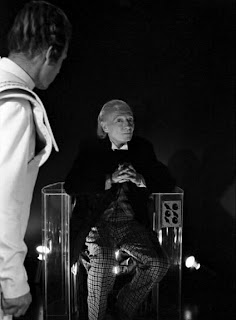 Ian evades capture. Barbara meets a Xeron named Dako, whilst Vicki meets their leader, Tor, and goes to their base. Here she learns that when the Moroks invaded they killed all the adults but spared the children. On reaching a certain age, they are shipped off to work in other parts of the empire. Tor's group want to rebel, but have no access to weapons. Vicki learns of the Morok armoury. It is unguarded, having an automated access system. Lobos orders that the museum be flooded with gas to flush the strangers out. Ian rescues the Doctor from the Morok freezing machine, but both are captured. Barbara is also caught. Vicki reprogrammes the armoury computer so that it opens for the her. She is then also captured. The travellers fear that all their actions may have simply lead them to become exhibits after all. However, the Xerons quickly overthrow their oppressors. Lobos and his deputy are killed. The Xerons start to break up the museum - but first the Doctor grabs an exhibit for himself. 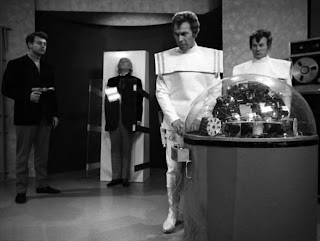 This four part adventure was written by Glyn Jones and broadcast between 24th April and 15th May, 1965.
Due to its technical complexities - particularly with the opening episode - Mervyn Pinfield was given the directorial role. It is that first episode for which the story is primarily remembered - and for the great let down of what then follows.
Part one is the first time that the programme really looks at the nature of Time - rather than time simply as the means of getting from one adventure to the next. The initial set up, with all the odd things happening, is very intriguing. There's the costumes, the broken glass, the lack of footprints and the non-reaction from the people whom the travellers encounter. The shock reveal of seeing themselves as lifeless exhibits would normally have been a cliffhanger, but we get to find out - at the end of only the first episode - what has happened (the jumped "time-track"). There's still 3 episodes to go, however. Where can it go next? A standard escape / capture / run-around I'm afraid.
Before I get to that, two other things to enjoy about part one: as Ian leaves the ship he is tapping his fists together whilst in the control room. He carries on doing this as he steps out onto the planet's surface - a simple but effective way of showing that the massive ship really does exist in that Police Box shell. Then there is the time-catching-up sequence - a montage of photographs, Ealing filming and studio (captured on 3 different dates). 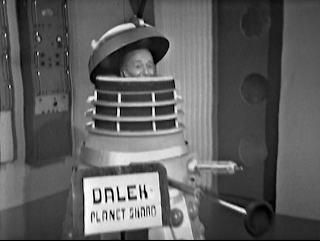 Episode 2 does at least have a degree of humour - mainly thanks to Hartnell. He hides in a Dalek, even imitating its voice, then there is the scene with the mind-reading chair. The Doctor throws up mental images to confound Lobos - he came here on a penny farthing, from an island full of walruses. When challenged that he isn't amphibious himself, we see him resplendent in an Victorian swimming costume.
With everyone tied up elsewhere, Maureen O'Brien gets to carry much of the latter half of the story. Vicki motivates the rather wet Xerons and solves the problem of the armoury door for them. Whilst the others are pessimistic about their fate - always seeing themselves moving inexorably towards it, she is constantly optimistic - pointing out the opportunities for changing their future.
Barbara spends nearly all of episode 3 staggering about six feet down a corridor. Ian is the usual man of action, having a few punch ups with the Moroks (he's teamed with his The Romans 'co-star' Peter Diamond for some of the time). 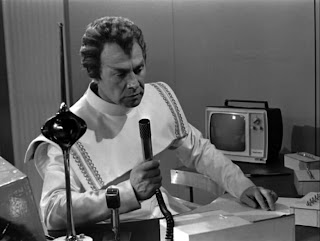 Of the guest cast, Lobos is played woodenly by Richard Shaw. His deputy, played by Ivor Salter, has a world-weariness that may have more to do with his views on the production rather than performance. Jeremy Bulloch plays Tor, making the best of what he has to go on.
The Moroks are hulking, arrogant blokes, with big hair and wide shoulders - like an army of Herman Goerings. The Xerons are all young, in black sweaters and skinny jeans - like hip jazz cats, except with double eyebrows.
There is actually a serious theme struggling to break through in the last three episodes - questions of fate and predestination.
Episode endings for this story are:


Overall, a great first episode whose potential is rapidly squandered. Not sure if the additional humour in the latter parts, which Jones claims was cut, would have helped any.