10 Moments With The Ponds

It's part of the DNA of the programme that characters get split up in order to create sub-plots and increased jeopardy. There is no exception to this rule for the Ponds. Even when trapped together in the TARDIS in The Doctor's Wife, for instance, House contrives to split them up. In the dolls house, Amy suddenly gets turned into a Peg Doll. These are 10 moments I like which they share. 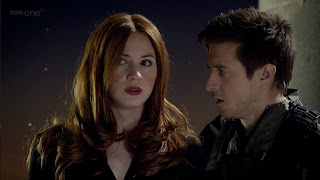 After searching for Rory, Amy suddenly realises he's been under her nose the whole time, as the loyal Captain Williams. An idealised sketch of him has led her astray. They're reunited once again. I've also chosen the ending to this episode mainly because Amy manages to explain the history of River Song and the plot arcs of series 5 and 6 to Rory in just a couple of lines. 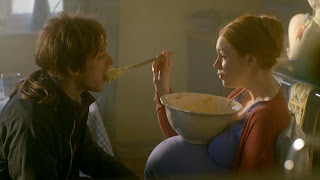 A glimpse of what might have been. It seems that the Dream Lord lifted this mostly from Rory's mind, as he seems much more at ease in this lifestyle than his wife. Sometimes an amateur dramatics group just isn't enough. 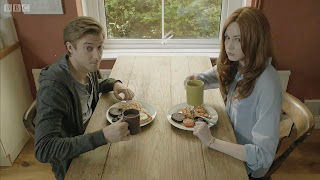 I could have chosen any moment from this, or parts of The Power of Three. I'm using this as a representative example of what life for the Ponds is like - domesticity accompanied by alien butlers. 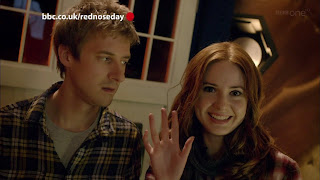 A bit of fun for Comic Relief. Again, it illustrates a small moment in their lives - this time aboard the TARDIS. A bit of humour and sexual banter, Amy flirting with herself and Rory getting ideas - then a slap in the face.

6. Eavesdropping (The Day of the Moon). 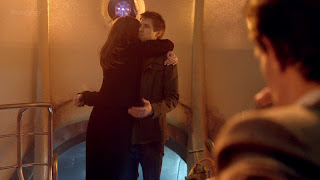 People who listen at doors might not like what they hear. Or listening in via a subdermal transmitter. Rory is unsure about who Amy was talking about when she was captured by the Silence - him or the Doctor. His confidence and trust are at a low ebb. He eavesdrops and also learns that Amy thought herself pregnant - and didn't tell him. She knows he's listening, however, and when she uses the same unflattering description for him that she had used earlier, he knows that it was him she was referring to all the time - that it was him she wanted to come and rescue her. 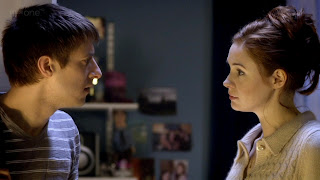 At the start of this episode we got to see the origins of Amy and Rory as a couple - going right back to their school days. I love the moment when we see the penny finally drop and Amy realises he has been carrying a torch for her all this time (and not gay after all) - all prompted by friend Mels (setting up her own creation). 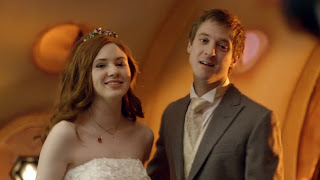 They could have spent a wet weekend in Blackpool, or taken a package trip to Benidorm, but Amy and Rory elect to take their honeymoon on the TARDIS. What would you rather have - a fortnight on a crowded beach or an Egyptian god running amok on the Orient Express. In space. No contest. If only they knew where it was going to lead... 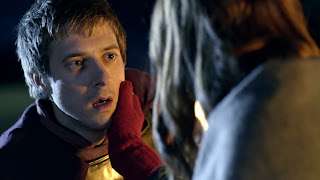 The moment when Amy starts to remember. Rory's suddenly been reunited with Amy, but she has no idea who he is. He's just one of the "Hot Italians". I love his reaction when she says one of his men gave her a blanket - the jealous "Which one?". Just a lovely scene - which makes what happens next all the more shocking.

2. The TARDIS Door (The Girl Who Waited). 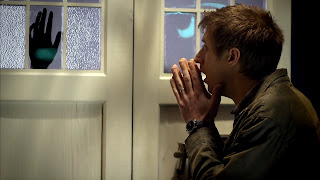 Do I need to say why this is here? Beautiful and heartbreaking. 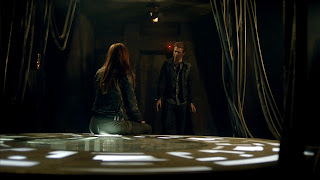 Forget Oswin and the massed ranks of Daleks. This is a key moment of this episode and a defining moment in the Ponds' relationship. Their marriage is as good as over and something has been stopping them communicating how they really feel about it. It all comes out as they reveal their true feelings whilst trapped in the Asylum.