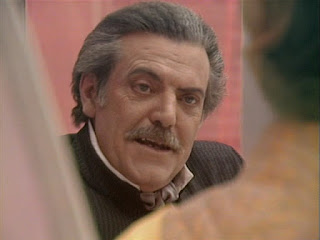 The Earth agent for the Leisure Hive entertainments complex on the planet Argolis. He contacted the managing board of the Hive to warn of impending financial ruin, as visitors from Earth were seeking their entertainments elsewhere. However, he soon turned up at the Hive unannounced claiming to have secured a deal to save the complex. He had been approached by a consortium of the insectoid Foamasi who wanted to buy the Hive. The Foamasi were the ancient enemies of the Argolins, however, and it was a war between the two worlds which had left Argolis irradiated and its people barren. Brock also claimed a seat on the board which he had previously declined. The Hive began to suffer acts of sabotage - designed to force the Argolins into selling. A Foamasi government agent turned up and unmasked Brock, and his taciturn assistant Klout, as criminal members of his own race, wearing disguises. The fake Brock and his accomplice tried to flee in the Foamasi ship but this was shot down and destroyed. Presumably the real Brock remained on Earth, but he may have been disposed of by Foamasi criminals - otherwise he could have contacted Argolis and the truth would have been revealed.

Played by: John Collin. Appearances: The Leisure Hive (1980).
Posted by GerryD at 22:26
Email ThisBlogThis!Share to TwitterShare to FacebookShare to Pinterest
Labels: A to Z