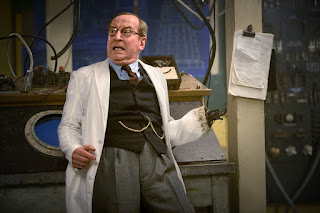 Professor Edwin Bracewell was a scientist, originally from Paisley in Scotland, who worked for Winston Churchill during the Second World War. He had a brilliant mind and had devised a number of weapons. Chief among these were what he called his "Ironsides". These armoured robotic machines had great firepower, and could blow German aircraft out of the skies. Churchill sought the Doctor's advice before deploying them, but the Time Lord failed to respond to his call to the TARDIS, so he pressed ahead. When eventually introduced to Bracewell and his inventions, the Doctor was horrified to discover that they were in fact Daleks.
Bracewell insisted that he had invented them - showing the Doctor his notes and blueprints. He claimed to have other advanced ideas which seemed to come out of nowhere, including devices that would enable aircraft to fly in space. When the Daleks revealed their true plans, Bracewell was horrified to find that his whole life was a fiction. He hadn't created the Daleks - they had created him. To prove the point, one of the Daleks blasted off his left hand. He was a robot, programmed with a whole lifetime of memories.
When the Daleks generated a beam from their spaceship to turn on all the lights in London, just as the Luftwaffe approached, Bracewell had a squadron of Spitfires fitted with his devices so that they could fly into space and attack the saucer.
The Daleks then revealed that Bracewell was fitted with a powerful bomb - an Oblivion Continuum - that could destroy the Earth. As it counted down to detonation, Amy Pond helped the scientist to regain his humanity, with memories of his childhood in Paisley and of a lover named Dorabella. The countdown was halted.
Once the Daleks had left, Bracewell was prepared for the Doctor to dismantle him, but he and Amy gave him time to get away. 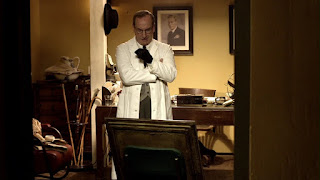 As it was, Churchill agreed to keep Bracewell on in his staff. He wore a black glove to hide an artificial hand. He was given a painting by Vincent Van Gogh, retrieved by British soldiers in France. This depicted an exploding TARDIS. He showed it to Churchill, who then tried to phone the Doctor, but the call was diverted to River Song at the Stormcage prison facility.

Played by: Bill Patterson. Appearances: Victory of the Daleks and The Pandorica Opens (2010).
Posted by GerryD at 00:38
Email ThisBlogThis!Share to TwitterShare to FacebookShare to Pinterest
Labels: A to Z