B is for... Brannigan 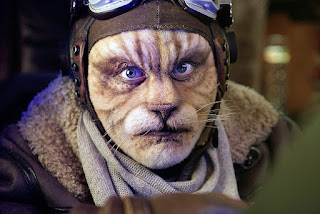 A Catkind from the planet New Earth, encountered on the Motorway by the Tenth Doctor. Thomas Kincade Brannigan, who spoke with a pronounced Irish brogue, and who dressed like a WWII fighter pilot, was travelling with his human wife Valerie to a new home when the city of New New York was struck by a deadly virus originating from a mutated Bliss mood enhancer. The Face of Boe, assisted by Novice Hame, was able to seal off the Motorway and save the millions travelling on it. The drivers and their passengers were oblivious as to what had happened.
Brannigan's children were born on the Motorway, as he and everyone else drove round for years seeking an exit. He had a number of friends whom he could contact - such as the Cassini sisters, whom he refused to acknowledge were really a same sex couple. He also had many tall tales to tell about life on the Motorway, and knew of the danger that lurked in the Fast Lane on the lowermost level.
The Doctor helped the Face of Boe open the Motorway, so Brannigan and Valerie could finally reach the city and make their new home.

Posted by GerryD at 21:32
Email ThisBlogThis!Share to TwitterShare to FacebookShare to Pinterest
Labels: A to Z