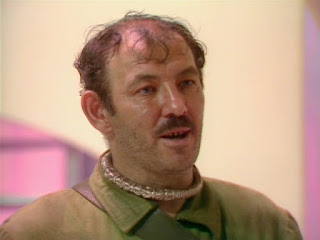 Squire to Orcini, a Knight who had been expelled from the Grand Order of Oberon. Orcini now worked as a mercenary and assassin for hire. Bostock was his loyal servant and companion. He looked after his master and his weapons, and would advise on mission details. Orcini did not always take his advice. Bostock had very poor personal hygiene, but this didn't seem to matter either to him or his master. Bostock was with Orcini when they were summoned to the planet Necros by the businesswoman Kara. She employed them to assassinate her business partner who was known as the Great Healer. Orcini and Bostock recognised him as Davros. Kara didn't like having to hand over most of her profits to him, and wanted to take control for herself. She gave the assassins a signal box to alert her when the deed was done, but it was really a powerful bomb.
On entering Davros' lair at the heart of the Tranquil Repose funerary complex, Bostock and Orcini shot Davros in his life support unit, believing they had killed him. This was a decoy, however, and Davros appeared unscathed. Bostock was blasted by an electrical charge. Only stunned, he fired upon Davros, blasting off his hand. He was then exterminated by a Dalek guard.

Played by: John Ogwen. Appearances: Revelation of the Daleks (1985).
Posted by GerryD at 23:53
Email ThisBlogThis!Share to TwitterShare to FacebookShare to Pinterest
Labels: A to Z