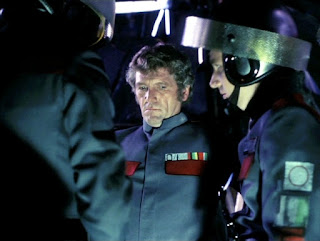 Mr Brazen had been the second-in-command on the human colonist ship which crash-landed on the planet Frontios in the far distant future. He was right hand man to Captain Revere, helping to enforce discipline in the harsh environment in which the colonists found themselves. Brazen ensured that the colony was never informed of the true circumstances surrounding Revere's "death", and he took on the role of mentor to his son - the new leader, Plantagenet.
As the young man grew, Brazen kept his grip on the fragile colony. He took action whenever anyone tried to delve too deeply into the planet's secrets. His control was upset by the arrival of the TARDIS crew on the planet, followed soon after by Plantagenet's apparent demise - sucked down into the earth like his father before him. Brazen insisted on going into the tunnels beneath the colony when the Doctor elected to investigate. He learned the truth about what had been happening - of how the planet was infested with gravity-influencing Tractators, who used human bodies to drive their mining machines. This had been the fate of Captain Revere, but Brazen was able to help Plantagenet escape a similar fate. Brazen was ensnared by the mining machine, and was killed when it went out of control and exploded - allowing the others to escape.

Posted by GerryD at 21:50
Email ThisBlogThis!Share to TwitterShare to FacebookShare to Pinterest
Labels: A to Z