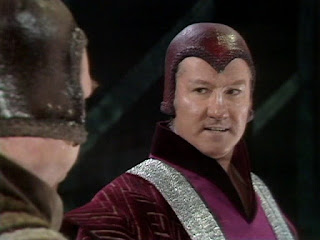 One of the Doctor's tutors at Prydon Academy on Gallifrey. He didn't think the Doctor would ever amount to much, owing to his propensity towards vulgar facetiousness.
The Doctor's first meeting with him after leaving his homeworld was when he returned to try to prevent the assassination of the President of the High Council. At this point Borusa had been elevated to the Cardinalship and was a politician rather than an academic. He led the College of Cardinals, and so took a close interest in the Doctor's trial after he had been framed for the killing. Though the Time Lords were without a leader, he insisted that the law should not be circumvented.
When it was revealed that the Master and Chancellor Goth were behind the assassination, Borusa was prepared to manipulate the truth. Goth - the real killer - was to be painted as a hero, who had given his life to thwart the Master. If heroes did not exist, then it was necessary to invent them. This would be more palatable than further evidence of corruption at the highest levels of Time Lord society.
Once the crisis was over, he did mark the Doctor well for his efforts in saving the planet, but was glad to see him leave. 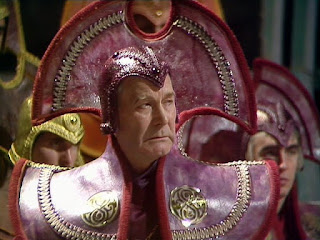 The Presidency was not filled immediately, as the only candidate had left the planet. Borusa, now Chancellor, took on the role of acting President. At some point he regenerated. The President-elect finally did return, with his companions Leela and K9. The Doctor took up the position, fiercely opposed by Borusa. The wily old politician realised something was wrong, and much of his argument with the Doctor was merely for show. He guessed the reasoning behind the Doctor having his chambers decorated with heavy lead shielding. When it became known that the Doctor was unwillingly working for the Vardans, who could read thoughts, Borusa admitted that if he had known the full truth he would not have been able to shield his mind. As Chancellor, he knew the location of the Great Key of Rassilon. The Doctor forced him to hand this over in order to build the D-Mat Gun, which was used to destroy the Sontaran invasion attempt. 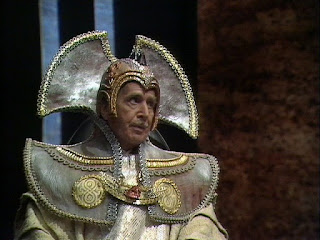 Borusa was finally confirmed as President of the High Council and regenerated once again. When an enemy force from the universe of anti-matter attempted unsuccessfully to break into this universe and bond with the Doctor, Borusa accepted that the only way to prevent it happening again would be for the Doctor to be executed - his body vapourised. A traitor was at work in his council - Chancellor Hedin - and he tried to frame Borusa, making it look like he was the one in league with the enemy. This was Omega. After the truth had been revealed, Borusa helped the Doctor and Nyssa flee Gallifrey to go in search of Omega on Earth. 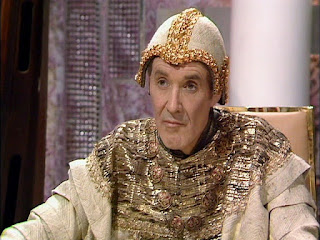 After a further regeneration, Borusa began to crave more power. He was no longer content to be Lord President for the remainder of his regenerations. He wanted to rule for all eternity. He knew the legends of the Dark Tower, where Rassilon was said to be entombed. He sought out various artefacts from the ancient times, and located the Time Scoop machinery which had brought alien races to Gallifrey to fight in the Game of Rassilon. He needed access to the Dark Tower, and so abducted the Doctor in all of his incarnations, as well as a number of companions to assist him, and set them down in the Death Zone around the Tower. Borusa framed the Castellan to throw suspicion away from himself, employing a Captain of the Chancellery Guard to kill him in a faked escape attempt. The Fifth Doctor discovered the truth, and found Borusa in the Time Scoop chamber. 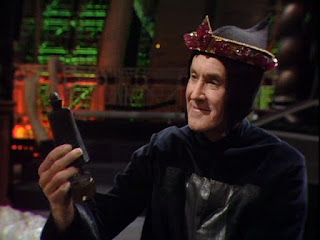 Dressed in black, he wore the Coronet of Rassilon, which gave him mental control over others - including the Doctor. The first three Doctors reached the Tower and opened the transmat relay, allowing Borusa to travel there safely. The combined minds of four Doctors were able to overcome the power of the Coronet. Borusa demanded his prize as an image of Rassilon appeared - immortality. The First Doctor argued that he should receive it - knowing that it was a curse rather than a blessing. Others had tried to claim the prize, and they were now frozen in stone on the flanks of Rassilon's bier. Borusa joined them - entombed forever in the Dark Tower. 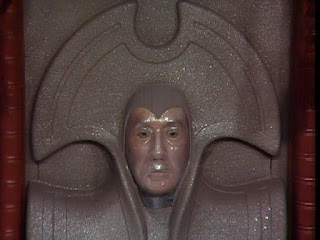 Posted by GerryD at 23:05
Email ThisBlogThis!Share to TwitterShare to FacebookShare to Pinterest
Labels: A to Z