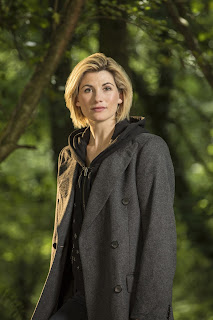 Interesting to see the reactions about Jodie Whittaker taking over from Peter Capaldi as the Doctor. Nice to see that most are positive. Four years or so ago, I was very much against a female Doctor, at the time when Capaldi was chosen. Well, I've mellowed to the idea since then, and would have been more surprised if they hadn't gone for a woman this time.
Making the Master female worked wonderfully. I never had a problem with Missy.
I haven't waded in with any comments in the run up to the announcement this time, as I realised it would, personally, be pointless. I'm a Doctor Who fan. Always have been. Always will be. I realised that whoever took on the role, I would be tuning in to Series 11 anyway, and writing about it on this Blog.
Jodie Whittaker is a damned fine actor. So long as Chibnall can deliver on the script side, I think the future for the programme looks good. Those fans unhappy with the choice need to give Whittaker the benefit of the doubt. The Doctor stands for many things - including tolerance and open-mindedness. Take a leaf out of his - or her - book.
Posted by GerryD at 20:44