C is for... Caecilius Family 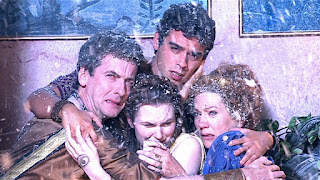 A family who lived in Pompeii in 79 AD. Lobus Caecilius was a successful marble salesman, married to Metella. Their daughter was Evelina, and their son was named Quintus. Caecilius bought the TARDIS from a street trader as a piece of art for his home. When the Doctor and Donna Noble came to retrieve it, they pretended to be marble inspectors. He was Spartacus, and so was she.
They learned that Evelina had extra-sensory perception, able to make prophesies and see into their minds. She was promised to the Sibylline Sisterhood. Her arm was turning into stone, the result of breathing in fine stone particles which were alien in nature. Quintus on the other hand was a listless youth, who spent most of his time out drinking with his friends and neglecting his studies.
Caecilius had been engaged by the city's official soothsayer - Lucius Petrus Dextrus - to provide a marble slab, which the Doctor later discovered had a circuit board carved into it. This was needed by the alien Pyroviles, who dwelt at the heart of Vesuvius. Quintus joined the Doctor in breaking into Lucius' home, and later helped destroy a Pyrovile which attacked the Caecilius villa.
In order to stop the aliens, the Doctor had to trigger the eruption of the volcano.
He was determined to leave with Donna, but she pleaded with him to save the family. They were ushered into the TARDIS and later watched in horror the destruction of their city. 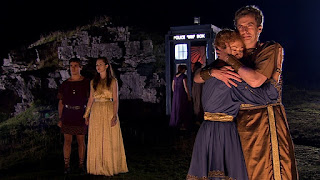 Caecilius coined the word volcano - from the God Vulcan. Later, the family settled in Rome, where Caecilius hoped to win a lucrative contract for Egyptian marble. Evelina had lost her powers and was going to school, whilst Quintus was training to be a doctor. The Doctor and Donna had replaced their household gods.