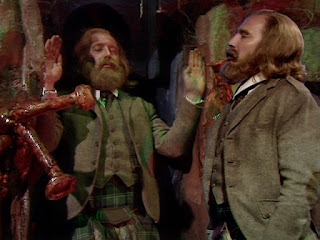 Nickname for the servant to the Duke of Forgill, whose ancestral home is near the shores of Loch Ness. His real name is Gaelic, and the Duke claims the Doctor and his companions wouldn't be able to pronounce it. Presumably the Caber - named after the famous Highland Games sport of tossing the caber - acts as ghillie, or gamekeeper on the estate.
It is a Zygon duplicate of the Caber which the Doctor, Sarah and Harry encounter. When the latter finds a survivor from a wrecked oil-rig washed up on a beach, the Caber shoots them both - killing the crewman and wounding Harry. The real Caber is rescued by the Doctor and escapes the Zygon spaceship before it self-destructs, killing the Zygon who had been impersonating him.

Played by: Robert Russell. Appearances: Terror of the Zygons (1975).