C is for... Carrington 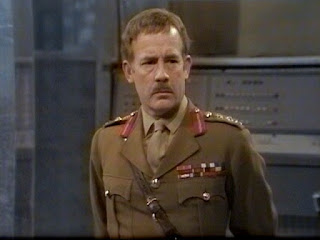 When the Doctor met General Charles Carrington he was head of security for the UK Space programme. He had previously been an astronaut, and had been the sole survivor of the Mars Probe 6 mission. He and colleague Jim Daniels had encountered a race of aliens on Mars who thrived on radiation, and contact with them had inadvertently killed Daniels. Carrington kept the details of what had happened secret, and developed a pathological hatred for the aliens. He decided on a plan to destroy them.
The aliens abducted the crew of Mars Probe 7, substituting them with two of their kind who would return to Earth in their place to act as ambassadors. The astronaut on the Recovery 7 vessel sent up to make contact with the returning men was likewise abducted.
Carrington knew of the aliens' radio frequency and used it to lure them into a trap. He employed the senior scientist at Space Centre - Bruno Taltalian - to commit acts of sabotage to prevent anyone from knowing what he was doing. He also formed his own mercenary outfit made up of ex-servicemen. They were used to guard the warehouse from where he sent radio signals to the aliens.
When the Probe 7 ship landed, his men helped him to hijack it. When this plan was foiled by the Doctor, who disabled the masked Carrington and his deputy by sticking them to "Bessie" using a forcefield, he adopted a second plan - abducting the aliens from Space Centre under cover of a false fire drill.
The aliens would be kept under guard by another employee - a terrorist named Regan. He would use them to carry out a number of crimes - thefts and killings. The plan was to discredit the aliens, and then to provoke global animosity towards them. He could not see that the aliens would destroy the Earth if their ambassadors were not returned safely to them. He was utterly convinced he had a moral duty to protect the planet from them.
As the alien mothership approached the Earth, Carrington had the Brigadier and his men put under arrest, and prepared for a global TV broadcast to incite hatred towards the aliens.
The Brigadier escaped, and he and the Doctor were able to halt the broadcast. Carrington was placed under arrest, still convinced he had done the right thing.

Played by: John Abineri. Appearances: The Ambassadors of Death (1970).