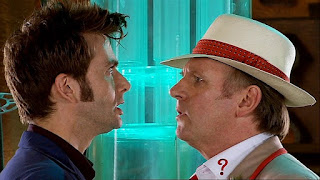 In which the Doctor leaves Earth after bidding farewell to Martha Jones, who has elected to stay and support her family after their year-long ordeal with the Master. The ship is not fully repaired following its conversion into a Paradox Engine. Suddenly an alarm sounds and the TARDIS lurches out of control. As the Doctor examines the console he bumps into someone else, who is doing the same. He is shocked to find that it is one of his earlier incarnations - his fifth. He thinks that this is his TARDIS, and believes the Doctor to be an interloper. As the Doctor tries to tell him who he really is, the Fifth Doctor suspects that he is a fan - possibly one of the LiNDA team - as he seems to know so much about him. He is not impressed with the coral design of the console room. 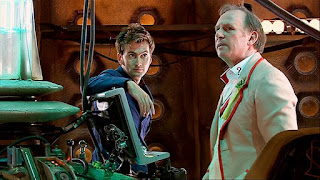 He finally realises that this is one of his future incarnations, and together they realise that their two TARDISes have someone merged. Unless they undo this, there will be a massive explosion which could blow a hole in the universe the size of Belgium. The Fifth Doctor begins to make the necessary adjustments, which the Doctor then finishes - using a supernova to counter the potential Black Hole. The Fifth Doctor realises that he knew how to do this as he had seen his earlier self doing it. The two TARDISes begin to separate back to their own times. Before he leaves, the Doctor has a chance to reminisce about his earlier self's companions and adventures, and to tell him how much he enjoyed being him. The Fifth Doctor fades away, but reminds the Doctor to reset his shields. Before he can do this, another alarm sounds and the prow of a ship smashes through the wall. A life belt identifies it as the Titanic... 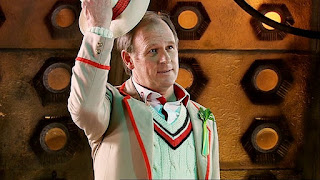 Time Crash was written by Steven Moffat, and was broadcast as part of the 2007 Children In Need charity night on November 16th. It is set in between the conclusion to Last of the Time Lords, and that year's Christmas Special - Voyage of the Damned. Technically, it takes place in the middle of the season three finale's closing moments, as there we already saw the Titanic strike the TARDIS.
It is a two-hander, featuring only David Tennant and Fifth Doctor Peter Davison. The director was Graeme Harper.
For the 2005 CiN night, Russell T Davies had written the mini-episode, sometimes called Born Again, which showed the immediate aftermath of the Doctor's regeneration, and set the TARDIS up to crash-land in The Christmas Invasion. For 2006, a fund-raising evening of Murray Gold's music was arranged for the Millennium Centre in Cardiff Bay.
Time Crash is generally accepted as canon, and so marks the only multi-Doctor story until we get to the 50th anniversary episode. 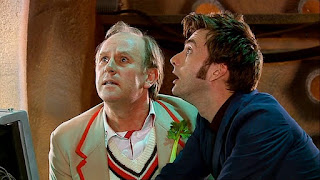 Overall, it is a wonderfully nostalgic little piece - a love letter to the Fifth Doctor. A pity it is only 8 minutes long.
Things you might like to know: