Inspirations - The Enemy of the World 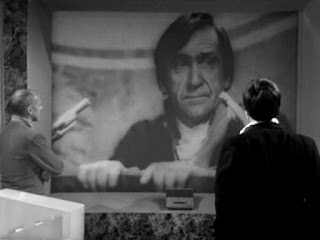 For many years this was the great unloved story from Season 5 - unloved for two reasons. The first is that it is the "one without the monsters". We've just had Daleks, Cybermen, Yeti and Ice Warriors, with more Yeti and Cybermen to follow, plus the sea weed creatures. The second reason is that single episode which survived the videotape purge. It's Part Three, where very little happens. Some crockery being smashed is about the dramatic highlight. The Ark may have had a Security Kitchen, but here we see Denes held captive in a Security Corridor. Nice wallpaper, mind you.
October 2013 saw the announcement of 10 lost episodes being found - and 5 of them were the remainder of The Enemy of the World. We can now see how that single episode was atypical of the rest of the story, which features helicopter and hovercraft stunts, lots of globetrotting, and the villain's underground base. The story has been re-evaluated, and now rates quite highly. Between DWM's Mighty 200 poll and its 50th Anniversary one, the story leapt from 139th to 56th.
This is the final story to be produced by Innes Lloyd, and to be script edited by Peter Bryant. The director is someone new to the show, who will go on to become one of its most influential characters.
Barry Letts had started out as an actor, but this career stalled somewhat when he returned from serving in the Royal Navy during the war. He still got a lot of work, mostly in television. What he really wanted to do was direct. Initially turned down for the BBC's director's course due to lack of experience, he persevered and finally got accepted. He knew Lloyd from his acting days, and was offered a directing job on Doctor Who. 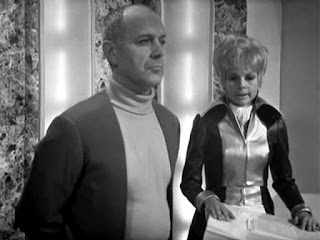 This story was written by David Whitaker, the programme's very first Story Editor. His last two outings involved the Daleks, but here he gets to write an international espionage thriller. There are monsters - but they are all human ones.
The obvious inspiration for this is the hugely successful series of James Bond movies. The first of these - Dr No - had premiered in 1962. The most recent release when this story was broadcast had been You Only Live Twice, the fifth of the series, in June 1967. However, the sixth film - Thunderball - was already being extensively trailed, as it opened just six days after Episode One of The Enemy of the World was broadcast. The planet was in the midst of Bond-mania.
The Bond trappings are clear. As we've said, there are no aliens or monsters in this. We have a purely human villain in the form of Salamander, who presents himself to the world as its saviour - his Suncatcher satellite focusing solar energy onto the planet to aid harvests. Had this been a Bond movie, this piece of technology might have been the weapon of choice for the villain - subsequent movies in the series did use satellites as weapons of mass destruction (Diamonds Are Forever, Die Another Day). Instead, Salamander is triggering earthquakes and volcanic eruptions to undermine global leaders, in order to usurp their places - either directly or by substituting them for weak-willed lackeys, most of whom he can blackmail into doing what he wants. 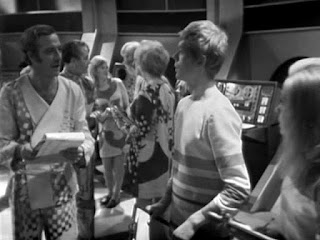 The odd thing is, we never hear anything about how he manages this tectonic tampering. We see one volcanic eruption, courtesy of some stock footage, but the mechanics of it are never touched upon. How exactly do the people in a subterranean base in Australia manufacture these events on cue?
The story behind the base has precedents in Science Fiction literature. The base personnel went down there as part of some test and were then told that a nuclear war had broken out, devastating the surface. Only Salamander comes and goes, pretending that their enemies are still active and need to be attacked, and radiation levels make it unsafe for them to leave the base. A number of stories feature people hiding in a shelter, such as Level 7, by Mordecai Roshwald (1959), and a number of Twilight Zone episodes revolve around bomb shelters. These days, nuclear wars have been replaced by zombie apocalypses - so the same stories can be recycled. One story by Philip K Dick needs to be mentioned, as it features humans being tricked into thinking a war is going on above their heads when there isn't - The Defenders (1952). The Avengers included a couple of adventures involving underground bases - generally employed as a means of infiltrating the country prior to an invasion. 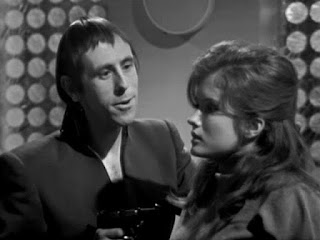 Other Bond trappings include the exotic locations - ranging from Australian beaches to East European mansions. We also have a range of exotic transport - with a hovercraft and a helicopter featuring in the opening installment, and mention of super-fast aircraft that can get you half way across the planet in an hour. The villain gets a henchman - the sadistic Benik. All the main Bond villains have a henchman - or woman, or both. The Enemy of the World throws in a further villain in Episode Six, as we find out that the man who has enlisted the Doctor's help - Giles Kent - was really one of the architects of Salamander's scheme, and wants to take over himself.
Kent has his own companion - Astrid Ferrier - who is unaware of his double-dealing. She seems to be modeled on Cathy Gale from The Avengers, down to the very 1960's costume based on 18th Century fashions. She flies helicopters, and can handle herself in fisticuffs with the male goons. And, of course, Mrs Gale actress Honor Blackman went on to become a Bond-girl. There's a lovely scene in one of the Mrs Peel stories where Steed gets a card from Mrs Gale, with a picture of Fort Knox on it. Steed muses: "Fort Knox... I wonder what she's doing there...?".
It should be noted at this point that the footage of the exploding helicopter is a clip taken from the model filming for the second Bond movie - From Russia With Love. (Another clip from the same filming will be used in The Daemons, co-written by Barry Letts, when he has become producer). The twist in The Enemy of the World is the fact that villain Salamander just happens to look like the Doctor. The Doctor has already had an evil double - the Abbot of Amboise looking exactly like the First Doctor - and subsequent Doctors will encounter evil doppelgangers - e.g. Meglos and Omega.
Evil doubles are again not new in literature. In Spy-Fi movies it is often the work of plastic surgery, and in Sci-Fi it is either android duplicates or versions from alternative universes. I have just watched an episode of Lost In Space in which a parallel universe harboured evil versions of Prof Robinson and Major West, and an earlier one featured a ruthless gunslinger who was the spitting image of Dr Smith.
Last word on the Bond inspirations - Salamander sounds a bit like Scaramanga. If you squint your ears. 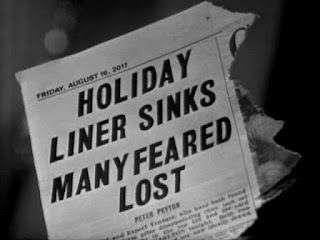 Before we close, a quick word about dating. Not romantic relationships, but the calendar variety. Until this story was recovered, people tried to place it in the mid to late 21st Century. Now, thanks to sharp picture image, we know that it takes place right about now. In Episode One we see that Astrid's helicopter has what looks like a tax disc - valid until December 2018. Later, base member Swann finds a scrap of newspaper concerning a ship sinking - dated Friday, 16th August 2017 - and he states how long ago that was. So this story is one of a growing number which make it hard to reconcile the Doctor Who universe with our own. Mondas did not return to the solar system in 1986, and there were no reports of War Machines on the streets of London in 1966.
Next time: the Yeti are back, and they're going Underground. A new character is going to be introduced who will have a significant impact on the programme, especially once Barry Letts has taken over. Peter Bryant gets promoted, and a couple of new faces arrive behind the scenes who will also have major roles to play as the series develops. One of them might even have helped you learn how to read...
Posted by GerryD at 22:36