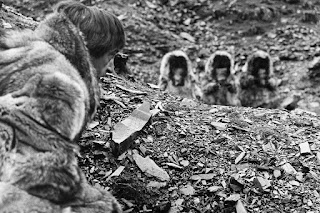 A fairly straightforward one this, as this is Doctor Who's first real foray into the realms of cryptozoology. This is the study of animals which have yet to be recognised by science, including the search for new species or ones previously thought extinct. Species become endangered, or die out altogether, but each year new ones are discovered - sometimes hidden in plain sight, such as when an animal, bird or insect previously thought to belong to a known group is found to have its own unique genetic fingerprint. The monthly publication Fortean Times has a regular column on the subject. Cryptozoology also covers the search for creatures which have attained mythical status. These include sea serpents, giant squid, lake monsters and large ape-like men such as Bigfoot. One of the other famous ones, Bigfoot's Himalayan cousin, is the Yeti, or Abominable Snowman.
This six-part adventure gives the Yeti a Sci-Fi spin - presenting them as robots in disguise, servants of an alien intelligence - before revealing at the conclusion that the creatures really do exist. 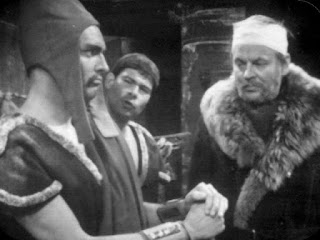 The Abominable Snowmen is written by Mervyn Haisman and Henry Lincoln. Lincoln had been an actor - under the name Henry Soskin. He had an interest in history, especially its more occult margins. Lincoln will later become obsessed with the mystery surrounding the small French town of Rennes-le-Chateau. He would collaborate on the book The Holy Blood and the Holy Grail, which formed the basis for the Dan Brown comedy The Da Vinci Code. (Well I found it a hilarious read). When called upon to play a part in a play about Ancient Egypt, he took exception to the lack of research from the author and agreed to make it more realistic. Thinking he could do better, he started his own writing career and soon paired up with Haisman. Haisman had also been an actor.
Both seemed to have been inspired in writing their first contribution to the series after viewing a Sunday Night Theatre presentation on the BBC back in 1955. This was called The Creature, and it was written by Nigel Kneale. It starred Peter Cushing as a Himalayan explorer searching for the Yeti.
You may well have seen the Hammer film adaptation, also starring Cushing, which went under the title The Abominable Snowman. As well as Cushing, both versions feature the actor Wolfe Morris, playing a Tibetan mountain guide. He features in the Doctor Who story as the Master of Detsen monastery, Padmasambhava.
The TV play and movie feature a Master of a local monastery who seems to have supernatural powers and can commune in some way with the titular creatures. Kneale's Yeti prove to be an ancient human offshoot, who are wise and gentle, and Kneale posits that they will become the future of the human race as well, after we have wiped ourselves out. 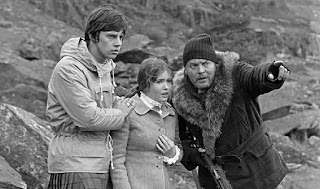 The Yeti, or Meh-Teh, is supposed to inhabit the Himalayas of Nepal, Bhutan and Tibet. It is said to be huge furry creature which walks upright like a man. It appears in ancient Buddhist writings. If it exists at all, many scientists think it is simply a type of bear, whilst believers think it is a missing link ape-man. Stories about the creatures first arrived in the west during the 19th Century, when the region began to open itself up to mountaineers, plant-hunters and other explorers. The term "Abominable Snowman" was first coined in 1921, by the British Everest Expedition. The party discovered strange animal tracks which their Sherpas claimed belonged to the Wild Man of the Snows. The "Abominable" part of the name derives from a mistranslation of the Tibetan word Metoh. It should mean "man-bear" but a newspaperman translated it as "filthy" - hence abominable.
Interest peaked in 1951 when that year's Everest expedition encountered a huge footprint, which was photographed with an ice-pick to show the scale. 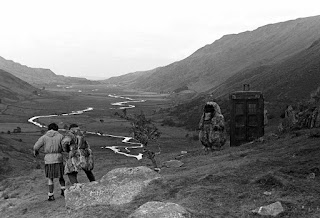 As with the Nigel Kneale storyline, Haisman and Lincoln feature a British explorer in their tale. This is Edward Travers, who has come specifically to hunt for the creatures. He suspects the Doctor of belonging to a rival expedition. The Abominable Snowmen is one of those stories which relates to an unscreened adventure, as the Doctor claims to have visited Detsen in the 16th Century and helped the monks fend off bandit attacks. He has a sacred relic in his possession - a small bell known as the ghanta - which he took for safekeeping, and now plans to return. A ghanta is actually a ritual bell used in Hindu ceremonies.
The writers then populate their monastery with a number of characters, some of whose names derive from Buddhism. Padmasambhava was an Indian mystic - also known as Guru Rinpoche - who brought a form of Buddhism to Tibet in the 8th Century, during the reign of King Trisong Detsen. Khri-song Deutsen was another name for him. He gives his name to the leader of the warrior monks, pledged to protect the monastery. The younger monk - Thonmi - gets his name from Thonmi Sambhota, a Tibetan writer, credited with devising the Tibetan alphabet in the 7th Century.
Ralpachan was another king, as was Songtsen Gampo. 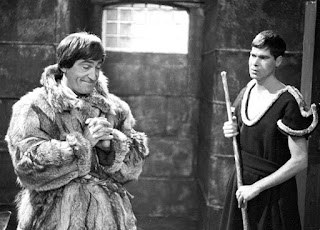 When it came to novelising this story in the 1970's for Target, writer Terrance Dicks was asked by his boss to slightly amend the names of the Tibetan characters. The boss in question was Doctor Who's producer Barry Letts, who was a practicing Buddhist, and he felt that it was disrespectful to name character after real people important to his philosophy. Dicks simply moved a single letter in each case, or added / removed a hyphen.
In closing, we should take the opportunity here to mention that this story marks the beginning of the great UNIT dating controversy. This story is categorically said to take place in 1935, so all subsequent datings mentioned by Professor Travers, and by the Brigadier thereafter, have to start from this point.
Next time: More icy escapades, as the Doctor and his companions encounter not-so-little green men from Mars...
Posted by GerryD at 22:46