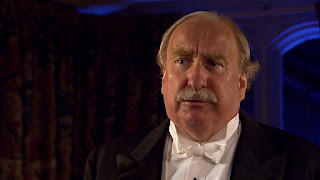 Colonel Hugh Curbishley was the husband of Lady Eddison, who in December 1926 had invited the crime writer Agatha Christie to her home for the weekend. Sir Hugh was confined to a wheelchair. He was working on his military memoirs, though could often be sidetracked by memories of seeing the can-can dancers in Paris in his youth.
He and Lady Eddison had a son named Roger, who was their sole heir. He was gay, carrying on a secret relationship with one of the valets - Davenport. The Doctor and Donna Noble crashed the party, and stayed on to help investigate the murder of family friend Prof. Peach - struck down by a piece of lead piping in the library. He had been researching the family's history. 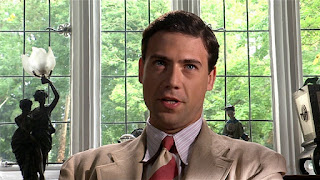 At dinner that night, Roger was also killed during the sudden appearance of a huge wasp-like creature. The killer proved to be the local vicar - Arnold Golighlty. He was Lady Eddison's illegitimate son, hence Roger's own step-brother, whose father had been an alien Vespiform.
Suspecting that his secret was about to be revealed by the Doctor and Mrs Christie, Sir Hugh admitted that he was not really an invalid. He had been feigning his disability as he was scared that his wife might leave him.

Played by: Christopher Benjamin (Sir Hugh), and Adam Rayner (Roger). Appearances: The Unicorn and the Wasp (2008).