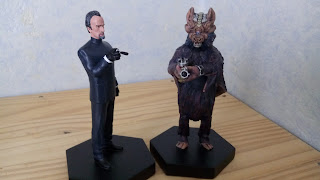 Three figurines this month, as we have the latest of the larger Special Editions released. Now before you wonder why Azal the Daemon is sporting a blue bracelet and finger ring, my figurine arrived in a damaged state. The right hand was off, and two of the fingers. I have had to make a temporary running repair with a bit of blu-tac, pending the purchase tomorrow of some super-glue. (Sending it back for a new one is just more hassle than it's worth). I have had other damaged figurines in the past - usually Daleks minus an eye-stalk or utility arm.
The two regular releases this month include the Roger Delgado Master, as seen in Terror of the Autons. The resemblance is a bit more caricature than realistic. He is posed brandishing his TCE weapon.
With him is a Tetrap, from Sylvester McCoy's debut Time and the Rani. 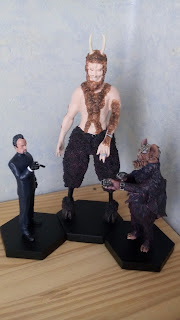 I'm not at all sure I like the Azal figure. The hair seems all wrong. I think they've used as a source an image of him where the hair has been cropped. The face should be rounder, with the hair shaggier. I dislike the colour difference between the chest / arms and the legs as well. Again, the source photographs may be to blame for this.
Next time - one of the alien Voord.
Posted by GerryD at 22:34