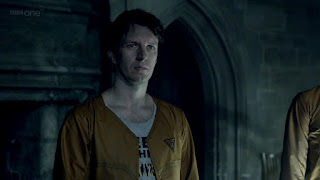 One of the crew of a 22nd Century acid mining operation run by Morpeth Jetsan. This was located in a ruinous medieval monastery on an island off the British coast. As the work was extremely hazardous, a substance known as the Flesh was used to create doppelgangers of the crew. They had all the memories and characteristics of the originals whilst they survived. They could only come into being when the humans linked themselves up to the substance. A massive solar event disrupted the process, giving the Flesh "Gangers" independent life of their own. A conflict then arose between the originals and their copies, which the Doctor tried to resolve. The Flesh Buzzer was killed by the crew's boss Cleave, who electrocuted him. The original Buzzer was then killed by the Flesh Jennifer, who wanted to lead the other Gangers on a revolt against those that had enslaved them.