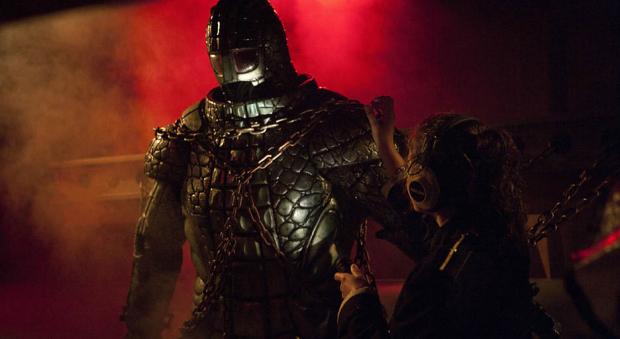 I've now given Cold War a second viewing - and I'm very glad that I did. My first viewing was clouded by my frustration with the new Ice Warrior concepts. I haven't really changed my mind on this - I still think they were changes too far and Gatiss should really have created an original monster for this tale.
A couple of things I am also not happy about - the drilling for oil in the Arctic ice explanation for the finding of the Warrior, the rather poor CGI for Skaldal (other than when he was lurking in the gloom), and the vocalisation by Nick Briggs.
To take the latter first, I felt it inferior to the classic whispering, hissing voices. The more creatures he voices, the more they start to simply sound like Briggs. There is a limit to vocal invention.
Showing Skaldal full on? As I said, CGI not brilliant, and too much information. I don't like my monsters demystified.
Drilling  for oil in sea ice? No.
Criticisms out of the way, I simply enjoyed the adventure more second time round - as well as some of the performances. I would love to see  David Warner reprise his role sometime. I appreciated Liam Cunningham's role a bit more. Tobias Menzies still had a bit of a thankless task, considering how good an actor he is.
Lovely to have another Troughton story referenced with the HADS.
One thing missing was any significant development in the Clara mystery. I do have my own theory about what this is - the seeds of which lie with the previous episode's opening montage. There's a couple of teasers I've read for Hide which just might seem to confirm I'm on the right track. More on this later...
Anyway, Cold War is one of those stories that does benefit from a second viewing. Maybe, sometimes, being such a fan of the classic series can get in the way of just enjoying a story.
By the way, whilst we are looking at Ice Warriors, doctorwho.tv have published the preliminary cover art concept for the August release of their debut story.