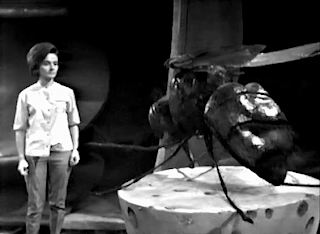 In which the TARDIS suffers a malfunction after the Doctor attempts an alternative means of getting Ian and Barbara back home. A component on the central control console overheats, and the doors suddenly start to open in mid-flight. The ship materialises, but when they check the scanner it shatters. The Doctor is worried about "space pressure".
Venturing outside, the travellers find themselves in a rocky gully. The stone seems strangely regular in shape, and partly composed of a concrete-like substance - though the sand granules are like pebbles. They split up to explore. The Doctor and Barbara come upon what appears to be a dead snake - though this is then identified as a massive earthworm. Susan and Ian find large eggs - and a dead giant ant. Nearby is what appears to be a poster advertising Night Scented Stock seeds - with a Norfolk, England, address. A massive matchbox sits beside it. Ian thinks they are in some kind of exhibition such as a Worlds Fair - but Susan and the Doctor have guessed the truth. The TARDIS malfunction has meant they have landed on present day Earth - but they have been reduced in size to only one inch tall. 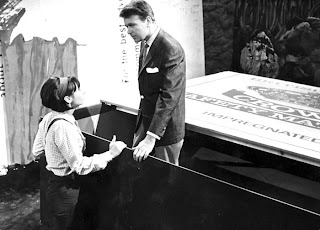 The ship has materialised in the cracks between crazy-paving stones, in the farmhouse garden of a scientist named Smithers. He has developed a new insecticide named DN6. A Government inspector named Farrow is visiting, and he intends to stop it going into full scale production as it doesn't differentiate between pest and beneficial insect life. This will ruin Smithers' business partner, Forester. Desperate, he murders the inspector.
The travellers narrowly avoid becoming a snack for a cat, and Ian and Barbara are carried into the laboratory of the building, after sheltering inside Farrow's briefcase. The Doctor and Susan are forced to clamber up a drainpipe to join them - emerging from the sink plughole. Barbara handles a seed coated with the pesticide and falls ill. If she cannot return to her normal size, it will kill her.
They try to alert the police by raising the handset of a telephone, but their voices cannot be heard by Hilda Rowse at the local exchange. She is still suspicious, and informs her policeman husband, Bert. Forester has tried to pretend to be Farrow on the phone to his ministry, but this hasn't fooled Hilda.
The Doctor and his companions engineer an explosion using a gas jet, match and an aerosol can. The blast temporarily blinds Forester - just as Bert arrives to arrest him and Smithers.
Back in the TARDIS, the Doctor reverses what he had previously done and they are returned to their normal size - saving Barbara. 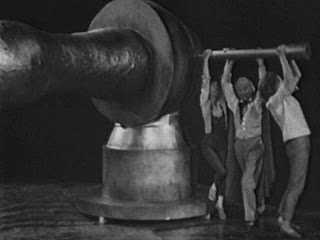 This three part adventure was written by Louis Marks, and was broadcast between 31st October and 14th November 1964.
Though filmed immediately after The Reign of Terror as part of the first year's worth of episodes, it was held back for 6 weeks to become the first story of Doctor Who's second season.
It was originally scripted and recorded as a four part story, but there were concerns about its strength as a season opener, and so the third and fourth episodes were edited together to make a tighter adventure.
The idea of miniaturisation had been around since the very beginning of the programme. This was the third attempt at this concept. Doctor Who stories at this time were intended to fall into 3 categories - those set in the past, those set in the future, and "sideways" ones. By this it meant taking the ordinary present day but adding a twist. Malcolm Hulke's  "The Hidden Planet", where everything is reversed, would have fitted this category.
It is an odd beast of a story - with the guest characters having no knowing interaction with the travellers. It's like two parallel storylines running alongside each other. The Doctor and his companions don't know anything about Smithers and Forester - who they are and why they are doing what they are doing. All they know, from observation and scientific deduction, is that a man has been killed and that there is a substance here which could kill all life on Earth. The whole Smithers / Forester / Farrow part of the story could have been lifted wholesale from an Edgar Wallace tale. 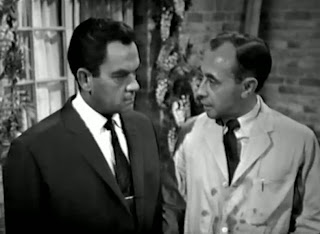 All four of the regulars are well served in this, and Alan Tilvern (Forester) makes for a suave baddie. He acts out of pure greed, whereas Smithers blindly believes that his creation will save the world, and any means justifies the end. Bert & Hilda lend a touch of comic relief to the proceedings.
The explanation for the shrinking seems very vague and unscientific - that "space pressure" - but we just accept it and get on with the adventure.
Ray Cusick designs some marvellous giant scale props and there are some great sets, such as the laboratory sink. Some of the insects come from another production, however.
This story marks the début of composer Dudley Simpson, who will go on to score a huge number of stories right through to 1979/80's The Horns of Nimon.
Episode endings for this story are:

Overall, a strange, inconsequential story, albeit with good performances and some great visual effects, that doesn't stick around long enough to overstay its welcome. It will never feature highly in best season opener polls though. 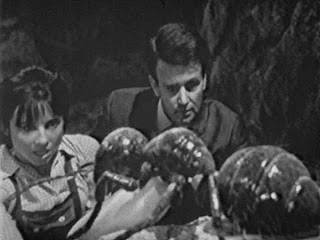 The Urge To Live.
This story has just been released on DVD, and the main special feature is a recreation of the missing episode's worth of material from parts 3 and 4. There would have been an episode called "The Urge to Live".
Most of the cut material is from part 3 and involves (a) the travellers working out what is going on regarding DN6, (b) Forester's increasingly convoluted efforts to cover up his crime and dupe Smithers, and (c) the growing suspicions of Hilda Rowse, and her efforts to make sure that the groceries get delivered on time.
In hindsight, having now seen and heard this material, one can only agree with the decision to edit heavily. The story is pretty much unaffected by the losses.

The recreation itself is, I'm afraid to say, a bit of a dog's dinner. Or perhaps an abysmally rendered CGI cat's dinner. Other missing episodes are uniformly animated and make use of the original soundtrack, but this makes use of a disparate variety of media and other sources.
There is amateurish CGI; re-voiced clips from other parts of the story with little or no attempt at lip-synch; newly filmed disembodied hands shuffling paperwork; and extreme close-ups of Alan Tilvern's face which obscure his mouth.
The voices themselves are achieved by William Russell and Carole Ann Ford recreating Ian and Susan, and new performances of the others by actors including Toby Hadoke. His Forester is actually the best of the lot.  The Hartnell impersonation by John Guilor is merely passable and then only at times. William Russell unfortunately simply sounds his age, which jars with the original material. Carole Ann Ford still sounds pretty much the same - but Susan has little to say in these missing sections. The others do not sound anything remotely like their characters.
We cannot fault uber-fan and one-time unofficial programme consultant Ian Levine for at least giving this a try. For me it just doesn't work.
It is the sort of thing you will watch once just to see what it looks and sounds like, but are unlikely to ever revisit.

PS: The DVD artwork is grossly misleading for the casual buyer, as it implies exciting giant ant attacks - whereas we know there is only the one dead example in the actual programme.
Posted by GerryD at 22:35