Story 5 - The Keys of Marinus 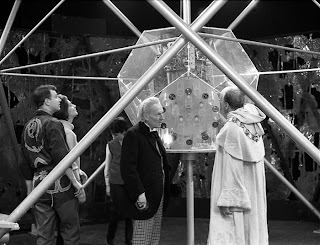 In which the TARDIS materialises on an island dominated by a huge pyramid. Exploring, the travellers discover that the surrounding sea is highly acidic. In the pyramid is Arbitan, keeper of the Conscience machine. This influences the minds of everyone on the planet, preventing aggression and criminality. Immune to it are the rubber-clad Voord. Arbitan needs to reset the machine, and to do so he requires the 5 micro-circuit keys which operate it. He has one, but the other 4 are scattered across the planet for safety.
The travellers refuse to go and find them, so Arbitan puts a forcefield around the TARDIS to compel them to help. They are given wrist-worn travel dials programmed with the keys' locations. After they leave, the Voord break into the pyramid and kill the old man. 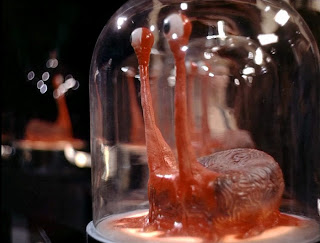 The first location is the city of Morphoton, where brain-like creatures hypnotise people into slavery. Barbara escapes their influence and destroys them. The travellers meet Arbitan's daughter, Sabetha, and her boyfriend Altos, and they agree to journey on with them. Sabetha has the second key. The Doctor elects to jump ahead to the city of Millennius, whilst the others travel to a ruined building in the middle of a dense jungle. A fake key is found here, and Ian and Barbara meet an old man named Darrius, who was a friend of Arbitan. He warns them about the vegetation - only to be throttled by a vine soon after. They escape with the real key and find themselves on a frozen mountainside. There is an encounter with a villainous fur-trapper named Vasor, and Ice Soldiers, who guard the third key.
At the city of Millennius, Ian discovers that you are guilty until proven innocent in this society, after he is accused of murder and the theft of the fourth key. The Doctor acts as defence in his trial and the true killer is unmasked - the prosecutor Eyesen.
Back on the island, Yartek, leader of the Voord, is waiting for them. When he inserts the fake key, the Conscience explodes - destroying him and his men. Sabetha and Altos will set up home in Millennius, whilst the TARDIS departs. 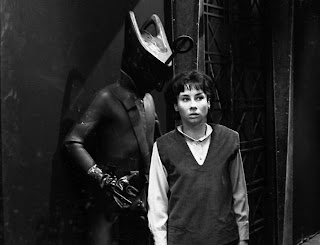 This 6 part story was written by Terry Nation, and directed by John Gorrie. It was broadcast between 11th April and 16th May 1964.
It was at this point that the Daleks were supposed to have their first appearance. Their début was brought forward when Anthony Coburn's 'Masters of Luxor' was scrapped. Nation came up with a quest-style story very quickly to fill this slot. The variety of locations provided a major headache for designer Ray Cusick, and he was never happy with the end results.
I personally think the sets are very good, considering the time and money constraints. There is the impressive Conscience machine, the Morphoton chamber which had to be duplicated (one nice, the other its shabby reality), a jungle, an ice cave, and the Millennius courtroom. Only the ice bridge, and Kala's bland living quarters disappoint.
Chief villains are the Voord - or Voords (either is acceptable). Plans to make them a new "big bad" never materialised. They appeared in the first annual, some sweet cigarette cards, and much later in a DWM comic strip, but they wouldn't be back on screen again. It's never quite clear who they are - Marinusians in rubber uniform or alien interlopers. They only really top-and-tail the story.
Villains of episode 2 are the Morpho creatures - posh brains with eyes on stalks - quite grotesque for the time. Episode 3 has deadly vegetation. This led to someone trying to sue the BBC, claiming this plot idea was his. He was unsuccessful.
Episode 4 has Vasor, played by the marvellous Francis DeWolff. There is an unsettling scene where it appears that he is about to rape Barbara - something that would obviously be handled quite differently today. This episode also features murderous knights in armour - Ice Soldiers - who guard the key. They appear to be human, but survive centuries of frozen hibernation. 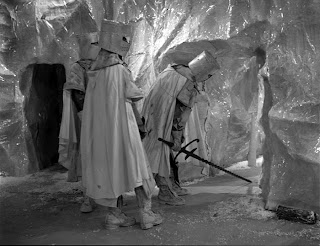 Weakest section of the story, and unfortunately the longest, is the courtroom drama of Millennius. This isn't helped by the fact that the real villains are flagged up so early on. They are played by Donald Pickering (Eyesen) and Fiona Walker (Kala) both of whom will still be appearing in the programme in the McCoy era.
Yartek only appears in the final episode, stretching credulity by pretending to be Arbitan.
William Hartnell is the first of the regulars to get a holiday in this story - covered by his decision to jump ahead to the fifth episode at the conclusion of the second, so that he could have a fortnight's paddle at Bognor Regis. William Russell and Jacqueline Hill get the lion's share of the action in the third episode, with its deadly traps and creeping vines. Edmund Warwick plays Darrius. He will return to play the robot Doctor in The Chase.
Of the guest cast, George Couloris is notable - the only actor from 'Citizen Kane' to have appeared in Doctor Who. Robin Phillips (Altos) shines, despite his costume. This story should be renamed The Legs of Altos...
Cliffhangers for this tale are: 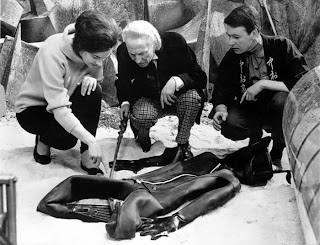 Overall not a bad story, our interest kept by the variety of locations and mini-adventures. It is a pity the courtroom episodes are a bit dull and monster-less, and the Voord get sidelined in their own story.
Things you might not know: