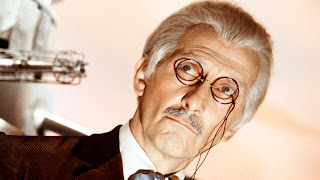 The Dalek Invasion of Earth, broadcast at the end of 1964, helped cement the Daleks firmly in the public's imagination, and the BBC saw various opportunities to capitalise on their success. They were approached by a variety of manufacturers and retailers keen to have their firms / products associated with Doctor Who - and especially with the Daleks.
It was inevitable that a cinema outing would be considered. Quickest off the mark was producer Milton Subotsky, who secured the rights to make one movie - with an option on a possible two follow ups. Rather than consider an original storyline, he opted to remake the Daleks' first TV outing - enabling them to be seen in widescreen (Techniscope) and in colour (Technicolor). Apparently Subotsky paid £500 for the privilege. His production company was Amicus, which was gaining a reputation for itself as a major horror movie stable (especially the portmanteau "Tales From The Crypt" style of films). Not wishing to associate a children's production with X-rated horror films, a separate production entity was set up, called Aaru. Subotsky's co-producer was Max J. Rosenberg. The director chosen to helm the film was Scotsman Gordon Flemyng (dad of actor Jason). It was Subotsky who adapted Terry Nation's original scripts - having to condense 7 x 25 minute episodes down to an easily-distracted-child-friendly running time of about 80 minutes. 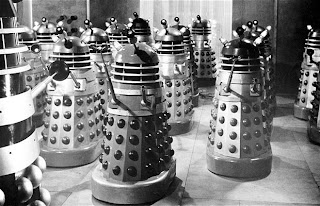 With the TV programme in almost year-round production, it was impossible to feature the television cast, and the producers wanted a big name star draw anyway. Peter Cushing, who had worked on a number of Amicus films and was best known for his Hammer Horror productions, agreed to play the lead character. He was very keen to be seen as not just a horror actor. Joining him as Ian was comic actor and musician Roy Castle. They had just worked together on "Dr Terror's House of Horrors" for Amicus, and got on very well. Jazz trumpeter Castle had been a late replacement in that film - it should have been clarinetist Acker Bilk.
Barbara would be played by Jennie Linden, and Susan by 11 year old Roberta Tovey, daughter of veteran character actor George Tovey. The principal Thal part - Alydon - would go to Barrie Ingham. (He would shortly be appearing with the TV TARDIS crew in The Myth Makers, playing Prince Paris of Troy).

Of course, for the expected children's audience, the human stars were immaterial. It was the Daleks they would be paying to see. The Invasion Daleks had been built up due to the need to include all-terrain wheels, but the ones seen in the TV version of this film had been only 5 feet tall. They had been silver in colour, with blue hemispheres.
For their big screen debut, the Daleks would be specially constructed - much taller and with a range of colour schemes. There would also be a lot more of them - so no need for flat photographic blow-ups. Most Daleks have dark blue domes and hemispheres, but there are also red and black versions - denoting leaders. 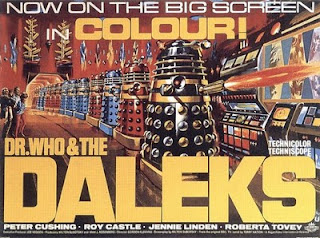 Other changes were made to give them a more sinister appearance - metal claws instead of sink-plungers, and real firepower. Jennie Linden recalled in 1993 that it was planned for them to shoot flame, but this would have been unsafe for the cast, crew and the predominantly plastic sets. Instead, the film Daleks would go the opposite way and have fire extinguishers for weapons. Objects would burst into flames when fired upon, however.

Story-wise, the main changes from the TV adventure occur with the initial set up. These are not the same characters as we have seen in Doctor Who, despite re-use of names. Peter Cushing's character is really called Dr. Who. He is a bit of a cliched absent minded, eccentric professor - very much from Earth. Barbara and Susan are both his grand-daughters. Ian Chesterton visits their home as he is Barbara's new boyfriend, come to take her on a date.
TARDIS (no "the") is Dr. Who's invention, knocked together in his back garden out of bits and pieces and housed in a Police Call Box. It is still a time machine, and still bigger on the inside.
The relationship between Dr. Who and his young relatives is set up in the opening shot - as we see the girls reading weighty science tomes, whilst he enjoys Dan Dare's latest escapades in that week's 'Eagle' comic.
Ian is a comic relief character for much of the film, but does gain a heroic sheen later on. It is his bumbling antics which launch everyone on their adventure, when he accidentally leans on a control lever. (He had earlier sat on the box of chocolates which he had brought for Barbara - which Dr. Who mistakenly thought were for him).
Once on Skaro - never named - the film pretty much follows the general narrative of The Daleks - sabotaging the ship in order to explore the city, the finding of the drug phials, radiation sickness, capture by the Daleks, Susan's lone journey back to the ship and encounter with Alydon, Etc. 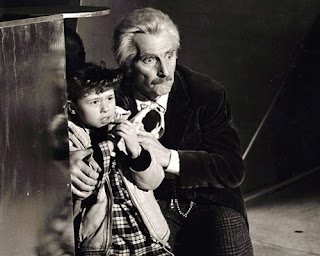 The heavy padding of episodes 6 & 7 is omitted - the long trek through swamp and cavern by Ian and Barbara. Whereas we saw the swamp monster in the TV story, here it is only implied through Roy Castle's reactions and sound effects. The cavern scene with Antodus and the precipice plays out differently. In The Daleks, he plunged to his death. Here, there is a handy ledge and he clambers out unscathed - much more family friendly.
As with the TV story, the Daleks are the cause of their own demise - though in much more spectacular style. On TV, one bumped into a bit of machinery, whilst here a whole phalanx of Daleks fire on Ian, miss, and blow up their own master computer. This huge, rotating machine is one of the set / design masterpieces of this film. (Shame the TV versions never had stuff as good as this. Ray Cusick probably wept at the première,  remembering the sort of budget he was saddled with...).
If you thought the TV Thals were a bit fey - the film ones are as camp as a row of tents. Just take a look at Barrie Ingham's fetching eye-shadow and lip gloss above.
The film ends with the time travelers not quite making it home - Ian opens the doors and sees a Roman Legion  marching towards him. 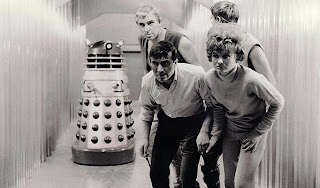 Dr. Who & The Daleks was released in August 1965, and the public reaction was very good, making it one of the top grossing British films of the year. It would even generate its own merchandise, to add to the general "Dalekmania" which the TV programme was stirring up. Production on a second film was rubber-stamped - and it would have more money put into it.
Personally speaking, this is my favourite of the two films. The other one did have more money thrown at it, and is more epic in scale, but this is a brilliant condensation of the first TV Dalek tale. Exciting and with a lot of humour. Performances are pitched at the target audience, so we cannot complain, and it's nice to see Cushing enjoying himself so much on this. He selected this role for exactly the same reasons that had appealed to Hartnell - to break type-casting and appeal to the kids.
The Daleks look superb in colour, and there are great sets - the aforementioned control computer and the Skaro forest. There is a great set piece where the apparently natural mound in front of the Dalek city slides open to reveal bright lights which dazzle the Doctor and Susan, enabling the Daleks to capture them.
Not sure about the preponderance of lava lamps, though.
This film would go on to influence two recent Doctor Who developments - the Matt Smith TARDIS exterior, and the New Paradigm Daleks.
Posted by GerryD at 21:44