Story 8 - The Reign of Terror 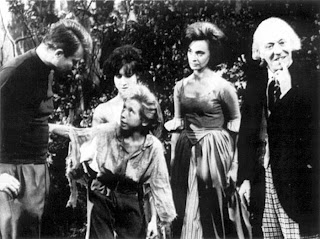 In which the TARDIS materialises in a quiet rural landscape, as dusk falls. The Doctor had earlier threatened to throw Ian and Barbara off the ship, after the former's implied criticism of his navigation skills. The offer of a farewell pint soon softens his mood. He thinks that they may well be back in England, 1963, but Ian wants to check first.
The travellers go for a walk and meet a ragged young boy who tells them that this is France in 1794. They come upon an abandoned farmhouse. Inside, evidence points to this indeed being revolutionary France. There are 18th Century costumes, which Ian, Barbara and Susan put on, and they also find forged travel documents signed by Robespierre. Whilst the Doctor looks around upstairs he is knocked out by a couple of  men named Rouvray and d'Argenson. It is revealed that this is a safe house - part of an escape chain for enemies of the state.
The local revolutionary militia turn up and surround the building. The two Frenchmen are killed, and the travellers captured - apart from the unconscious Doctor who is left behind as the militiamen set fire to the house. The Doctor is rescued by the young boy, and sets off for Paris on foot to save his friends. 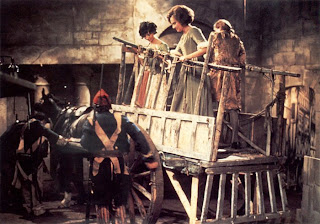 Ian, Barbara and Susan are locked up in the Conciergerie prison. Ian is in a cell with a dying man named Webster, who gives him a message for a man named Jules Renan. Interested in Webster, and what he may have said, is Robespierre's right hand man Le Maître. The Doctor has an encounter with the brutal overseer of a road gang, who he manages to hoodwink before travelling on. He reaches Paris and sets about obtaining a disguise for himself - that of a Regional Official from the south. This should give him access to the prison.
Barbara and Susan are taken in a tumbril to the guillotine, but Renan stages an escape. Ian also escapes after purloining his cell key, so that when the Doctor turns up at the prison, all his companions have gone. He meets Le Maître  who takes him to meet Robespierre.
Barbara is wooed by Renan's friend Leon Colbert. Ian turns up, following Webster's instructions. He and Leon attend a rendezvous which turns out to be a trap. It transpires Leon is a traitor. He is killed. Le Maître reveals that he is actually an English agent called James Stirling, who is behind the escape chain. He agrees to help rescue the recaptured Susan if Ian and Barbara will do a spot of spying for him. They pose as inn keepers and see Robespierre's colleague, Barras, plot with a Corsican soldier named Napoleon Bonaparte.
Robespierre is overthrown. Susan is freed as promised by Stirling, and the travellers flee back to the safety of the TARDIS. 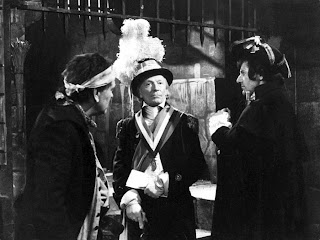 This six part story was written by Dennis Spooner, and was broadcast between 8th August and 12th September 1964.
Unfortunately, episodes 4 and 5 are missing from the archives. These are due to be animated for the forthcoming DVD release, accompanying the audio from the missing episodes. I first saw this story when it was screened at the NFT in the 1990's. Then, the two missing episodes were covered by a breathless recap filmed by Carole Ann Ford at the Longleat exhibition. This made so little sense it got the biggest laugh of the evening - despite the story itself having a wonderfully humorous section when the Doctor has his run in with the oafish road supervisor, who he first tricks then crowns with a shovel. I strongly believe that Hartnell could have been a great comic actor had he been given more of a chance. He is superb throughout this story.
Ian is locked up at Ealing Studios for two whole episodes (2 and 3), so that he can finally get his chance to holiday at Bognor Regis.
Carole Ann Ford is particularly badly served in this tale. In the tumbril, Susan suddenly falls unrealistically ill - even asking Barbara to leave her behind, despite the fact she's heading for imminent decapitation. Plus, she also manages to get sent back to the Conciergerie after the earlier escape.
Not for the first time, Barbara finds herself subject of someone's romantic interests. Unfortunately this is all doomed to end in tears as it is the villainous Leon Colbert - played by Edward Brayshaw, who will return as the War Chief in The War Games - who shows the interest. 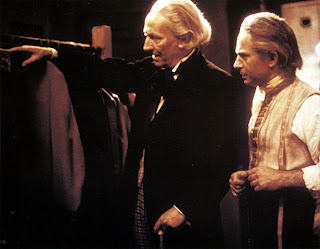 It seems bizarre that this is said by Susan to be the Doctor's favourite period of Earth's history, given its carnage and political instability. Several revolutionary regimes had risen and fallen between 1789 and 1794, some lasting mere months. All ended bloodily in the Place De La Revolution. In the year in which this story is set, this square saw 1300 executions in just one month. The foppish Maximillien Robespierre, architect of the "Reign of Terror" met his own end here. 'Hoist by his own petard', as it were. Dennis Spooner has done his homework. The shooting of Robespierre in the jaw - to shut him up - is accurate, and Paul Barras did indeed - albeit inadvertently -  usher in Bonaparte's Empire. If you want to know more about this fascinating period of history I would strongly recommend as a good starting point Christopher Hibbert's "The French Revolution" (Penguin, 1980).
Episode endings are: 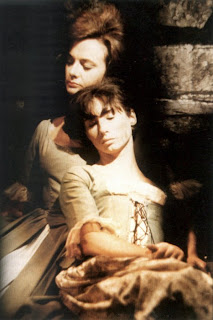 Overall, a strong historical story - generally accurate. It has some moments of humour amongst the bleak subject matter. It has Doctor Who's first ever outside broadcast material - a brief shot of the Doctor walking across a field as he heads for Paris in part 2. The incidental music, by Stanley Myers, riffs "La Marseilles" throughout. This story marks the end of Doctor Who's first season.
Things you might like to know: