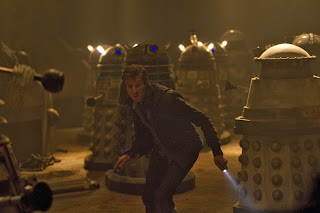 If there is a new episode of Doctor Who on Saturday, then Tuesday is publicity day. All of the weekly TV listings magazines are released today - and we generally get some new photographs or, in previous years, a preview clip or two.
Best of the lot as far as the magazines are concerned is the Radio Times. A Doctor Who cover, brief interviews with the regulars and Moffat's personal exclusive previews. The Dalek Wallchart is on the fold-out inside covers.
Combom (who I suspect must run a little newsagents) has scans of all the listings mags including all the relevant DW pages from RT.
Moffat has given a few snippets of information about all 5 episodes - no spoilers and nothing earth shattering. 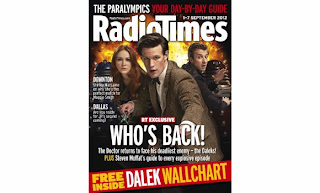 Asylum of the Daleks - The Doctor is asked by a mysterious woman named Darla Von Karlsen to help find her daughter (I assume this is how the Daleks trap him). The Asylum is regarded as a myth - a planetoid "cracked open" and filled with all the battle-scarred Daleks that even the Daleks are afraid of.
There is a major surprise just after the title sequence...

Dinosaurs on a Spaceship - The spaceship is ancient - it is implied it is 65 million years old, so these dinosaurs are not alien ones. The Doctor has to save the Earth and the dinosaurs from extinction.

A Town Called Mercy - The Doctor and his companions get caught in the crossfire between an alien fugitive and the cyborg Gunslinger. The Gunslinger attacks whenever anyone crosses the town boundary. The question is, who is the villain? The Doctor takes up a gun - so things must be bad.

The Power of Three - the black cubes turn up one day and do... nothing much. The Doctor has to wait a year for things to happen - so he moves into Amy & Rory's spare bedroom.

The Angels Take Manhattan - Nothing new to add I'm afraid. The Doctor has been visiting the Ponds for years, and they are a surrogate family for him. He doesn't notice that Amy now needs glasses to read, however. But it is all going to end in heartbreak very soon.

Also released today are the other two DWM covers (issue 451). I expected them to be Dalek variants, but they actually cover episodes 2 & 3. 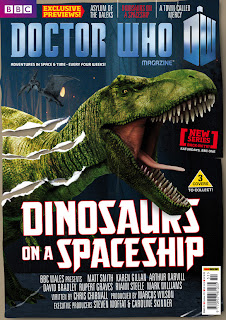 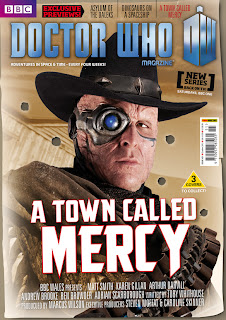