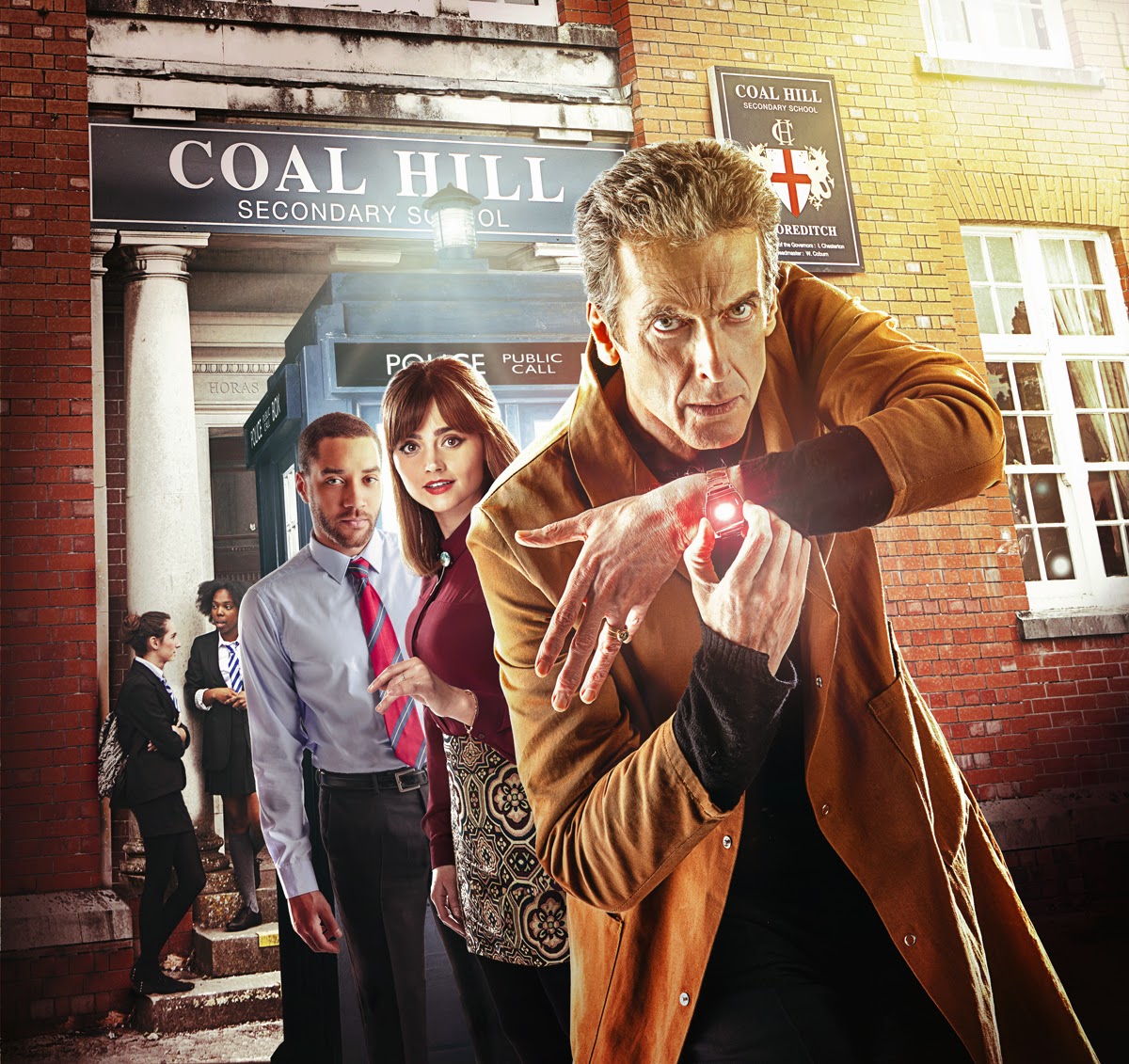 On first watching, very late on Saturday night, I wasn't too sure about this story. Did we really need a whole 45 minutes just to engineer the meeting between the Doctor and Mr Pink - and see how they did or did not get on? The Skovox Blitzer was a wonderful design and it was nice to see Jimmy Vee back again - but in the end it was merely a MacGuffin. Obligatory monster / threat of the week but ultimately the thing to bring about the said meeting of the two men in Clara's life.
The Caretaker, for me, required a second viewing. I came away far happier with this story. For a start there is just so much humour in it - especially from Capaldi and Coleman. Some cracking one-liners, again often at Clara's expense. Loved, for instance, his indignation at being thought Clara's "Space Dad". The way that he automatically assumed that Clara's boyfriend was the one who bore a passing resemblance to his previous incarnation was a nice touch.
Initially, the fact that the Doctor cannot comprehend how an ex-soldier could be anything other than a PE teacher was funny - but the more he banged on about it the more I got annoyed. Was he really being pig-headed and ignorant - prejudiced even - or was this all very deliberate and calculated - to provoke a reaction? By the end we did see that the Doctor expects Danny to prove himself worthy of Clara. Nice that Danny himself spotted this.
(What is it with the Doctor's poor memory recently? Back in The Snowmen he seemed to have forgotten all about the Yeti / Great Intelligence, then in Deep Breath he couldn't remember the SS Madame de Pompadour robots. Now he's forgotten that his very good friend the Brigadier became a maths teacher on leaving UNIT).
Talking of Danny, I continue to be impressed with Samuel Anderson. Apart from his brief appearance as a future descendant of Danny's, his character is still tied to the sub-plot of Clara's non-TARDIS life, and so could be a bit of a thankless role. As an ex-soldier he has the potential for the action man role. He now knows all about the Doctor and Clara's other life, has encountered an alien death machine, and been inside the TARDIS. Hopefully he'll make a journey in it soon. Or is he destined to always be the Earthbound anchor?
Someone who did make a journey in the TARDIS was Courtney. It was a bit of a surprise to see how the Doctor took to her so readily, and it was she who accompanied him on the mission to dump the Blitzer in space. We know that next week she gets to play a fuller role - travelling to the Moon.
The story arc was back in evidence again - with closing scenes set in the mysterious afterlife / Promised Land / Nethersphere. Capaldi's colleague from The Thick of It - Chris Addison - made an unscheduled appearance. Like Michelle Gomez, it was originally thought he would only be appearing in the finale. It was implied that Missy is God. Or god. Or a god... I will be very surprised if the season arc denouement is anything but scientific in nature, rather than religious / spiritual.
Next week we have Kill The Moon - and the teaser certainly promises a good old-fashioned scary story. We've also been promised something quite shocking from the Doctor...
Posted by GerryD at 19:10
Email ThisBlogThis!Share to TwitterShare to FacebookShare to Pinterest
Labels: Series 8