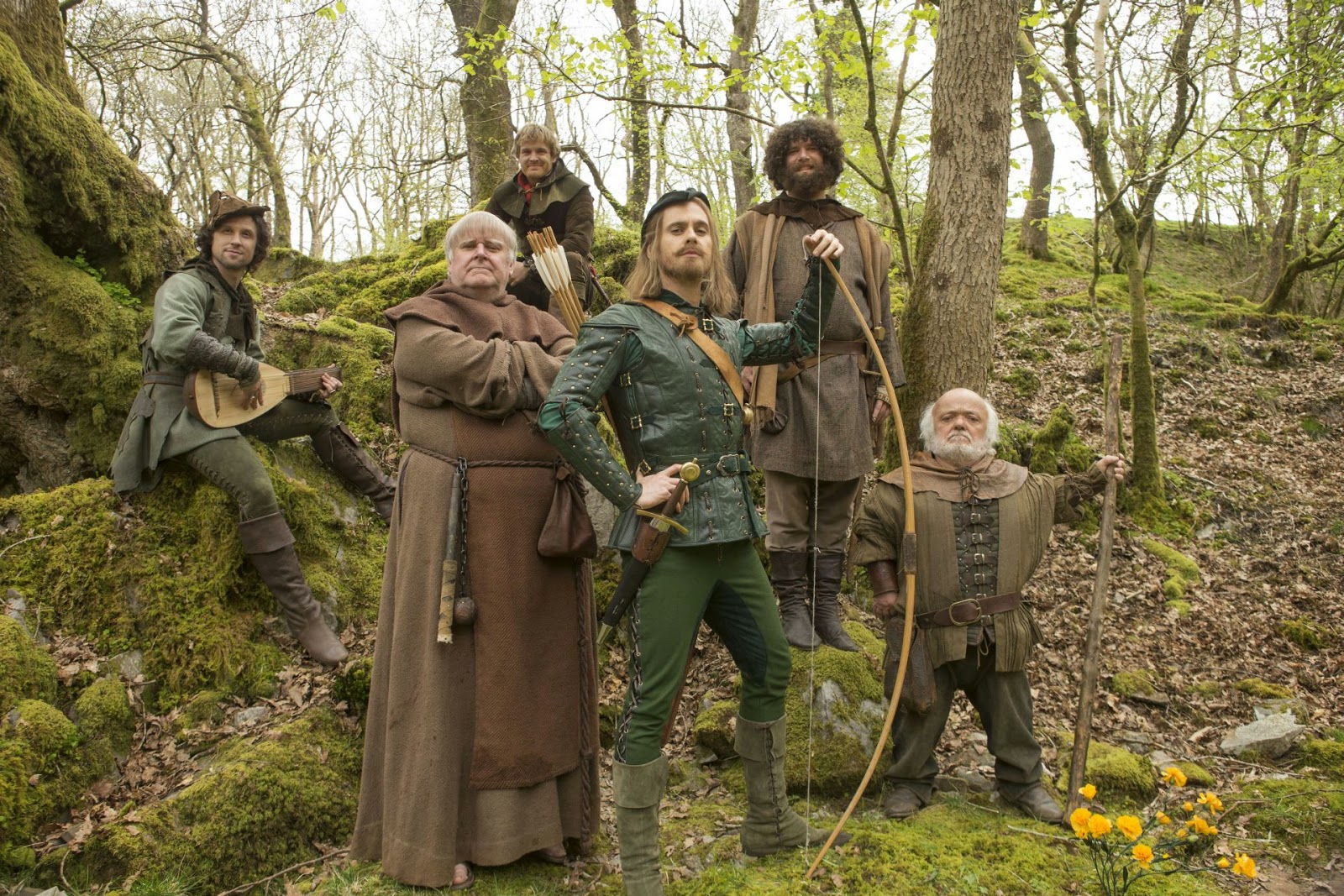 Did you spot Patrick Troughton - television's first Robin Hood? When the Doctor showed Robin the robots' database on him, we also saw the Errol Flynn version - and according to Mark Gatiss in the DWM preview piece last month, it was this latter incarnation from which he took his inspiration. He stated he couldn't really be bothered with other versions - a great shame as that suggests he doesn't think much of the wonderful HTV Robin of Sherwood, starring first Michael Praed (series 1 & 2) then Jason Connery (series 3). (The third series is not so good).
So, with Robot of Sherwood we get the "men in tights" Robin - laughing heartily at everything he sees - something which really got on the nerves of the grumpy new Doctor. These Merry Men were annoyingly so.
The men were all rather underused - about two lines each. A bit of a waste. Tuck was Trevor Cooper, who had played Takis in Revelation of the Daleks. Alan-A-Dale was played by Ian Hallard - who had played director Richard Martin in Gatiss' An Adventure in Space and Time, and who just happens to be the writer's partner.
Key elements of the Robin Hood myth were on view. There was the archery contest which features in most versions of the tale - including the winning arrow splitting the one already in the bull's eye. Robot adds other arrows splitting the first arrow etc - though the Doctor later admits that he fitted his with a homing device.
A lot of the story revolves around the rivalry between the Doctor and Tom Riley's Robin - both determined to out-hero the other. With them chained up together for a lengthy chunk of the episode, Clara gets to meet and seduce / be seduced by Ben Miller's Sheriff of Nottingham. Didn't he remind you a little of the Anthony Ainley Master?
The robots themselves were visually impressive. I would have preferred their method of dispatch to have reflected the fact they were disguised as knights - rather than laser beams. A great pity that we never got to know anything about who they were. We learned only that they were destined for "The Promised Land" - this week's reference to the series' story arc. No Missy seen this time. That's two robotic races determined to reach this destination so far.
Previous celebrity historicals have been littered with references to the featured character's life / works - most notably in the Gareth Roberts stories. Robin Hood doesn't really have anything to latch onto in this respect, though it was odd hearing Shakespeare and Karl Marx being quoted - as well as a play on something Henry II (allegedly) once said. A couple of words sounded anachronistic - "balderdash" and "gallimaufry". The former might well be an adaptation of a medieval word - "balductum" - but the word only really enters common usage from the late 16th Century. "Gallimaufry" is also 16th Century - but may derive from an older French word. Let's give Mr Gatiss the benefit of the doubt.
One classic series story I was very much reminded of was The Time Warrior - particularly in the second half, with the spaceship about to blow up the castle. The basic premise of the local baron being aided in his villainy by robot knights is lifted directly from the Bob Holmes story.
Overall, a much lighter episode than the first two. I understand a brief edit was made to omit a decapitation - the BBC being sensitive to current events in Iraq. The demise of the Sheriff - falling into a cauldron of boiling gold - was quite shocking. The tone of the piece should have seen him doing a Count Grendel of Gracht and vowing to get his revenge as his plans came to nought. (The Sheriff is always defeated in Robin Hood stories - but rarely killed off. There is usually a sub-villain like Sir Guy of Gisbourne to be bumped off).
Great to see Capaldi given some more humorous material to work with.
Next week's story looks intriguing - though I am concerned that it features children quite prominently. Stories with kids in them have generally been poorly received - from Fear Her to Nightmare in Silver, via Night Terrors (all languishing in the bottom quarter of the recent DWM anniversary poll). Danny Pink's son will be introduced, and we saw him as an older man, dressed in the Doctor's Sanctuary Base spacesuit...
Posted by GerryD at 20:48
Email ThisBlogThis!Share to TwitterShare to FacebookShare to Pinterest
Labels: Series 8