Series 11 in the Radio Times 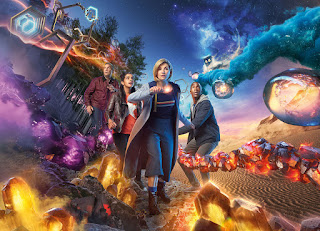 As well as the very colourful new image above being released today, the Radio Times has a preview for the forthcoming series - 13 reasons to watch the 13th Doctor, basically.
It doesn't really say a lot, but does mention that there will be lots of monsters (just none that we all know and love), and that all 10 episodes are "stand alone" - so not just single-parters. This implies no major story arc, but we'll see. It makes it clear that you can join without having ever seen a single episode before, though there will be enough reference to the past to keep us longer term fans happy.
Item No.8 is interesting: "The mystery of the missing TARDIS continues... "
Item No.11 is the one that lets us know some of the characters / places we are going to encounter.
Mention is made of: "Epzo, a life-changing bike ride, Robertson, the Ux, Umbreen, Rosa, Desolation, Kandoka's moon and Ribbons". Of these the only one we know about for sure is "Rosa" as there is an episode based around civil rights activist Rosa Parks. Robertson, being a Scottish surname, might come from the episode in which Alan Cumming features as King James VI and I.
Today they also gave us the title for the second episode - The Ghost Monument.
Posted by GerryD at 23:43