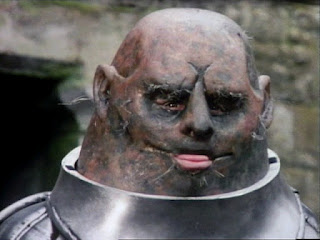 The Time Warrior was written by Robert Holmes, not long before he would take over the post of script editor on the series. The show was in a state of flux as it began its 11th season, with both Barry Letts and Terrance Dicks planning to leave at the end of it. They already had their escape vehicle all lined up - a new science-fiction series for the BBC called Moonbase 3. This would be a more serious adult drama, dealing with the realities of living in space. There would be no monsters or aliens. The threats would be political, criminal, and environmental. Letts intended to direct this opening four part serial, but work on the other project meant that he had to pass.
As it would happen, the viewers did not take to Moonbase 3. Sci-fi fans wanted the monsters and aliens, so felt let down when they failed to materialise, whilst the non Sci-fi fans kept away as they expected that it would be all monsters and aliens and therefore just another Doctor Who.
(Note the way that Space:1999 went down the Moonbase 3 route initially, with only one real monster in its first season, and attempted to relaunch itself in the second season with a multitude of monsters). 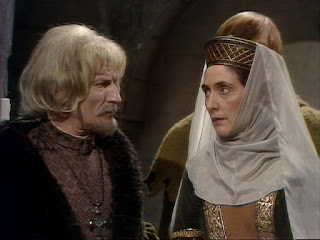 As well as letters asking when the Daleks would be back, and ones suggesting a story where all three Doctors met up, the production office received a lot of queries about the show doing a historical story, as it hadn't done one of these for a long time. The Pertwee Doctor had never been seen to visit any of Earth's historical periods, apart from a brief sojourn on the SS Bernice in Carnival of Monsters - and that's really in a time loop, in an alien machine, on another planet.
To launch the new season, Letts and Dicks decided to have the Doctor go back in time, properly, for the first time since the mid Troughton era. However, they knew that the viewers, especially the younger ones, still wanted their Saturday teatime fix of monsters and aliens. Robert Holmes agreed. He had a love of history. He just didn't want to have to write about it.
The oft quoted story goes that he and Dicks met to discuss the story, and Holmes was given the brief of setting it in medieval times. Claiming he did not know anything about this, Dicks gave him a book about castles and told him to get on with it. (Remember this, for when we get to Horror of Fang Rock...).
Holmes decided on what we now call the pseudo-historical approach -  a story set in the past, but with some alien and / or futuristic element thrown in. This had been tried quite successfully in the past, in two full stories (The Time Meddler and Evil of the Daleks), as well as segments of two of the Hartnell Dalek stories (The Chase - where we see the Daleks being responsible for the mystery of the Mary Celeste), and The Daleks' Master Plan (where the Daleks and the meddling Monk visit Egypt at the time of the building of the Great Pyramid at Giza).
The Time Warrior marks the beginning of a regular run of these pseudo-historicals, and it should be noted that the revamped series has never visited Earth's past without some alien threat being present. History simply provides a colourful backdrop to a Sci-fi adventure that could often just as easily have been set on an alien planet or on contemporary Earth. 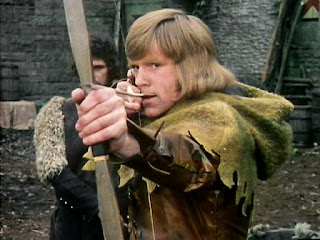 The actual time period Holmes opted for has never been definitively pinned down. No year is mentioned, and the absentee King is never named. Most people are happy to set it in the period of the Crusades, during the reign of Richard I. He died in 1199, and his successor - John - didn't spend time much time away from England. However, in The Sontaran Experiment - written by different authors, but with Holmes as their script editor - Sarah mistakes Field Major Styre for Commander Linx, and states that she saw him destroyed "in the 13th Century". If the Doctor never actually got round to telling her what year she had been taken to, then this might be a simple mistake on her part - not knowing the Lionheart's exact dates.
As most English monarchs spent a lot of their time fighting in France, the time period of this story could just as easily be much earlier, or a little later. Irongron's dismissal of Sir Edward and his like as "Norman ninnies" suggests that the Normans have not been in the country all that long - so that might imply a much earlier date (such as during the reign of Henry I at the beginning of the 12th Century).
Sir Edward is Earl of Wessex, and Wessex didn't really exist as such once the Normans invaded - downgraded as a regional entity in 1071. (The title of Earl of Wessex was reestablished not that long ago, for the Queen's youngest son - another Edward).
Both the BBC and ITV loved the Crusades, so it is most likely that this is the period Holmes intended for his story. It was the time of Robin Hood, after all.
An obvious inspiration for Holmes in having new companion Sarah Jane Smith plunged into the medieval world might be Mark Twain's A Connecticut Yankee in King Arthur's Court. (If there ever was an Arthur he would have been a Dark Ages warlord, but TV and movie companies liked to have medieval trappings in their Arthurian productions). Twain's story was published in December 1889.
It was filmed in 1931 with Will Rogers as the Yankee, remade in 1949 with Bing Crosby in the role, and then again in 1952 (with Boris Karloff as King Arthur). There have been numerous remakes since.
A number of Sci-fi writers had stories in which someone from the present, or future, travelled back to medieval times, when they weren't going back further to meet (and in one instance become, thanks to a bootstrap paradox) Jesus. 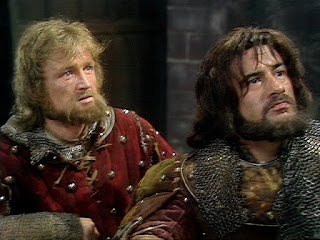 Carnival of Monsters had introduced us to one of what would become a staple of Robert Holmes' writings for Doctor Who - the comedic double act. That story had featured two pairs - Vorg and Shirna, and Kalik and Orum. Here we get the robber baron Irongron, and his dim-witted lieutenant, Bloodaxe. Clearly Irongron himself isn't all that smart, which makes Bloodaxe's declaration that his (Irongron's) is indeed a towering intelligence all the funnier. The other line everyone remembers is Irongron's description of the Pertwee Doctor as a "long-shanked rascal with a mighty nose".
Both of these character's names apparently come from real people. Eric Bloodaxe was a 10th Century Norse ruler.
In the days before this story got a DVD release, fan lore had it that there was an anachronistic potato in the kitchens where Sarah briefly poses as a scullion. This turned out not to be the case, though I am reliably informed that there is an apple that shouldn't be there, as it is a much later variety. The BBC props guys were good - but they weren't that good. 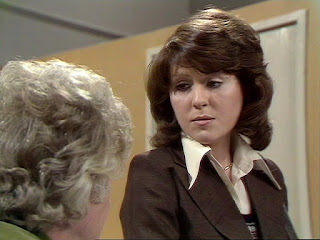 Of course, The Time Warrior is of great significance for introducing to the programme Sarah Jane Smith as played by Elisabeth Sladen - consistently voted the most popular of all the companions.
We now know that she wasn't the first choice for the role. The actress selected and offered a contract - April Walker - was tall and blonde, and Pertwee took exception to her. Nothing personal - they had acted together on stage happily enough. The problem as he saw it was that the Doctor should be the more physically imposing figure. He always stated in interviews that he would shield his companion with his cloak, like a mother hen protecting its chick. This had clearly been the case with the more diminutive, child-like Jo Grant. The Doctor even refers to the chick flying the nest on learning that Jo is leaving him to get married in the previous story.
Barry Letts wanted the new companion to be a much more strong-willed and independent character, with their own career. The programme was also finally facing up to feminism. As such, Sarah was an investigative journalist, who would encounter the Doctor and his world through her attempts to get a good story.
It has been said that the Doctor almost got two new companions in this story, as young Hal the Archer, played by Jeremy Bulloch, was briefly considered to be kept on. He had previously appeared as the young Xeron rebel Tor, in The Space Museum, and is best known now as the original Boba Fett. The Doctor would soon get a young male companion, as it was intended to replace Pertwee with a much older Doctor and they needed someone better able to handle the fisticuffs. 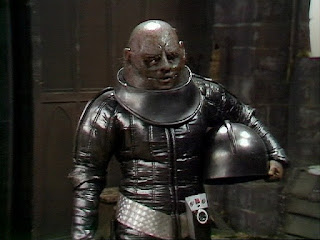 The other significant introduction in this story is Linx, first of the Sontaran race we will encounter. On mishearing what his race is called, Bloodaxe thinks he is a Saracen, which takes us back to that dating issue, and a likely setting for the Crusades. As the story is set in days of olde when knights were bolde, Linx initially looks like he is wearing conventional armour. It was a stroke of genius on the part of the designers to have his head the same shape as his big domed helmet. The Sontarans were never better than the lone example we see here, played by Kevin Lindsay. A no-nonsense, speaks-his-mind Australian, when the director (Alan Bromly) questioned his pronunciation of the race name, thinking the emphasis should be on the first syllable, Lindsay insisted on stressing the second syllable - claiming that as he came from there, he should know.
Sadly, with the introduction of Strax, the reputation of the Sontarans has been quite diminished of late - a great concept reduced to a joke.
Linx has an obvious parallel with the Doctor - an alien stranded on a primitive world and forced by necessity to assist a military commander. And like that very first pseudo-historical Doctor Who story, with a similar title, the alien is happy to meddle with history.
Next time: the Doctor takes Sarah back to the present day, though London is empty of people but full of monsters. Look out, it's the crap dinosaurs!
Posted by GerryD at 23:26