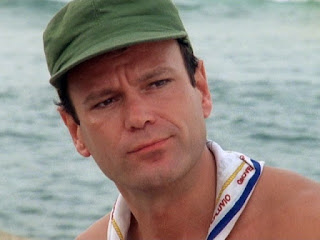 Professor Howard Foster was a marine archaeologist who was step-father to Peri Brown. He was taking part in a dive on an ancient wreck off the coast of Lanzarote when the Doctor and his companion Turlough visited the island, after the TARDIS had homed in on a mysterious alien signal. The android Kamelion had brought the ship here, whilst Turlough had attempted to cover it up. The signal emanated from a golden artefact which Foster had brought up from the wreck - an object which Turlough recognised as coming from his home planet. Peri had wanted to borrow money from Foster so that she could go travelling around Europe with some friends, but he tricked her into becoming trapped on his boat to prevent her going. She stole the artefact and tried to swim to shore. Getting into difficulty, she was rescued by Turlough and brought onto the TARDIS. Kamelion then dematerialised the ship with her on board - taking it to the planet Sarn. Kamelion was really under the Master's influence once more, and he made it appear like her step-father in order to trick her into giving him the artefact. When the Master's mental control slipped, the Howard-Kamelion's face turned silver - prompting the High Priest of the Sarn people to believe he was their deity returned to them.