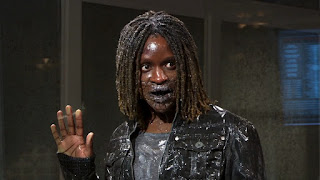 A parasitical organism which inhabited the water supply of Mars. By the time a group of humans visited the planet in 2059, setting up Bowie Base One, the organism had been frozen in the polar ice cap and deep within the water table for a number of centuries. The Doctor surmised that the Ice Warriors had trapped it there. The base took its water from the ice, but used filters to make it safe. One of these filters failed, and crewman Andy Stone became infected when he ate a carrot which had been watered with the supply. He mutated rapidly - his eyes becoming white and the skin around his mouth becoming cracked and blackened. He also began to produce large quantities of water, which he used to infect a colleague, Tarak Ital. Soon the base fell under siege as others were infected. One of the crew - Maggie Cain - observed her colleague Yuri watching a video from his brother on Earth, and learned that this was a planet of oceans. The Flood, as the infection was collectively known, decided to go there. Knowing that just one drop of infected water could cause widespread contamination if it reached the Earth, base commander Adelaide Brooke decided to evacuate. However, it got to the pilot of their rocket ship and he self-destructed the craft to prevent it being used. Brooke then elected to destroy the base with a nuclear explosive. The Doctor knew that this was a fixed point in time, but decided to change things - believing that this was his right as the last of the Time Lords. The base was blown up, destroying the Flood and those already infected, but the Doctor made sure that there would be survivors, when history said there had been none.