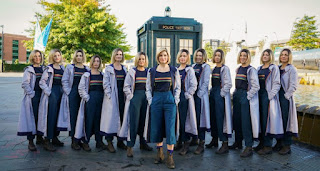 Just over a week and half until one of the above embarks on their TARDIS travels. The UK timeslot for October 7th has now been confirmed as 6.45pm - which is around the time I hoped it would be, in terms of competition from ITV and capturing younger viewers. The east coast of the USA will therefore be getting it at 1.45pm. (It will be 3.45 on Monday morning in Sydney, however).
I am not going to be around for the next few days, so my next post will be on Tuesday 2nd October. That should coincide with the Radio Times issue for the week covering the debut, when we should hopefully have some more substantial news about what we can expect. See you then.
Posted by GerryD at 22:56