F is for... Forester 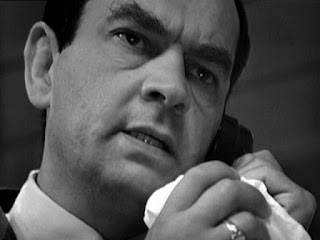 Forester was a ruthless businessman who entered into a partnership with a scientist named Smithers to manufacture and sell a new pesticide, called DN6. Believing Smithers' claims for his discovery, Forester sank all of his money into the deal - only to learn that a civil servant named Farrow had serious reservations about the formula. DN6 didn't just kill harmful insect life - it killed everything, and could enter the food chain to damage other wildlife, including human beings. When Farrow visited Smithers' home, on route to his holiday abroad, Forester attempted to get him to change his findings. When he refused, Forester shot him dead. He then attempted to cover up the crime - calling Farrow's superiors, pretending to be him, in order to claim that DN6 had no problems. He was going to dump the body at sea, to make it look like an accident. The Doctor and his companions were also at the house, but shrunk to one inch in height after a fault had developed with the TARDIS. They struggled against the odds to try to stop Forester and Smithers - first by trying to call for help, and then by arranging an explosion, leaving an aerosol can next to a lit gas jet in Smithers' lab.
The can exploded just as Forester walked into the room, blinding him. A suspicious local policeman arrived just as this happened and arrested the pair.