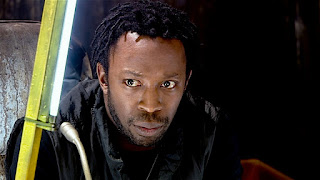 Zachary Cross Flane was the second-in-command of an expedition to investigate a strange planet which was being held in a stable orbit on the edge of the black hole K37 Gem 5. The expedition was being funded by the Torchwood Archive on Earth, and they sought to discover the source of a powerful energy signal which was emanating from deep beneath the surface of the planet, which was named Krop Tor. The commander, Walker, was killed soon after their arrival, and so Flane had to take charge. He and his colleagues established a Sanctuary Base on the planet, which was prone to severe seismic disturbances. To assist with the drilling operations and carry out menial tasks, they had a complement of the alien Ood with them.
The Doctor and Rose Tyler arrived in the base, and became trapped when an earthquake caused the section of the base which housed the TARDIS to fall down into a chasm.
The expedition soon came under attack by a malevolent demonic creature known as The Beast. It took over the telepathic Ood and turned them against the humans. Flane became trapped in the control area and from there attempted to guide his crew to safety. He decided to abandon the base and evacuate everyone in their rocket. When Rose refused to leave the Doctor behind, he had her sedated and placed on the ship. The Doctor used the TARDIS to pull the rocket to safety after the Beast had been defeated, and the planet had plunged into the black hole. Flane recorded commendations for all the crew - human and Ood - who had died.