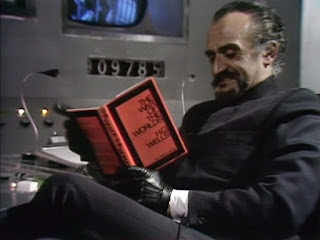 When it came to working out how best to celebrate Doctor Who's 10th Anniversary, Barry Letts and Terrance Dicks looked to the programme's past. One of the things they considered was the fact that there had been a mammoth 12 part story during the William Hartnell era - The Daleks' Master Plan.
What if they were to embark on an epic of similar scale for Season 10? Both men knew the director of that earlier story - Douglas Camfield - and so they had a word with him about how he had coped. He told them to run a mile from another 12 parter. It had been extremely hard work - especially when the principal writer had produced very little in the way of a workable script. Camfield and then story editor Donald Tosh had had to virtually write the episodes not being written by Dennis Spooner themselves. The story simply hadn't sustained itself over the 12 weeks. Of course, Camfield had the additional problem of the way the programme was made back in the mid 1960's, where recording had to be done "as live", and with limited VFX available. The series could now utilise CSO, and episodes could be filmed out of order. (This story was recorded before The Three Doctors, though it was the third story broadcast). There was also the major matter of the smaller season.
Taking Camfield's advice on board, Letts and Dicks decided on the next best thing. Two 6 part stories that could have a linking element - so they would be the equivalent of a 12 parter.
The first half would feature the Master, who would be involved in some suitably grandiose scheme. It would transpire that he was really working for the Daleks, and this would lead into a Dalek story proper. 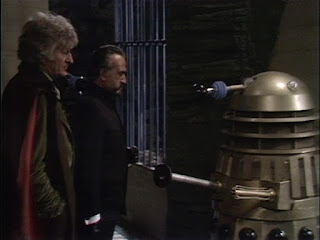 Following their discussions with Terry Nation regarding his giving permission for the Daleks to be added to what would become Day of the Daleks, the writer decided that it might be fun to revisit his creations for himself. His efforts to spin them off into their own show were now well and truly buried, and they didn't make him any money if not in use on Doctor Who - always a consideration for Nation. He agreed to write a new Dalek story himself for the tenth season, with an option to have first refusal on any other one each year thereafter.
The writer chosen to script the first half of this double story was Malcolm Hulke -  a safe pair of hands and very good friend (and one-time landlord) of Dicks. Not only would he provide an exciting set of episodes, it was known that he could inject some social comment into the proceedings.
His last outing had been Colony In Space, which had a lot to say about pollution, self-sustaining farming communities (good) and big industrial corporations (evil).
For the Master's scheme, they looked back to that earlier Dalek story. Then, they had been intent on waging war against whole galaxies. Hulke took this notion and then took a look at current world events. This was 1972, and the Cold War was in full swing. What if some third party were to try to heat it up? 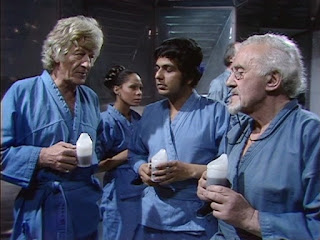 This wasn't a new idea by any means. You just have to take a look at the James Bond movies to see that. An obvious example is You Only Live Twice, where Blofeld attempts to stoke a war between the USA and USSR by sabotaging their respective space programmes. His spaceship is hijacking their craft, disguised as the opposite side's on each occasion. SPECTRE are being employed, or are partnering, China in this. From Russia With Love features a SPECTRE assassin (Red Grant) who carries out a number of killings and places the blame for each on either the western security forces or the eastern ones.
So, the Master is Blofeld, the Daleks are the Chinese, Earth is the USA, and the Draconians are the Russians. That makes the Doctor James Bond, and not for the first time. He's the independent agent who is able to look at events from an outside perspective, and work out what is really going on.
Hulke throws in some additional elements, such as the internal politics of the Earth Empire. We have a Peace Party, whose members are sent to life-long imprisonment on the Moon without fair trial. The President does not hold absolute power. She has a very vocal opponent who is out to unseat her - so there is still some sort of democratic process. However, her chief opponent is the one who she has to work with most closely - the representative of the Military, General Williams. You could probably guess from what we see on screen that she and he have some sort of a history. The novelisation delves into this a little deeper. They were romantically involved but political opponents. He was given his role after a bitterly fought election, as a way of appeasing both sides. This would explain why she works alongside someone who seems to go against her every decision. She wouldn't have given him the job willingly. 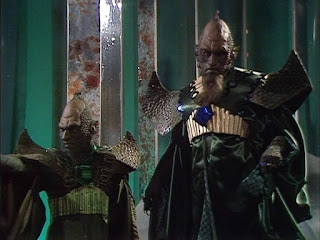 On the opposite side of the Milky Way we have the Draconians. They are clearly based on Shogunate Japan. They are a proud warrior race, led by an Emperor - though he rules only through the support of other powerful families. Other warlords can depose him and install their own dynasty if he shows weakness. The Cold War evolved out of the ashes of World War II, but in Frontier In Space we have a situation where the two sides have actually gone to war against each other in recent memory. The USA and USSR preferred to fight each other by proxy - bankrolling and supporting opposing sides in a number of regional conflicts.
Fans of Babylon 5 will be very familiar with the lead up to that earlier war. One suspects that J Michael Straczynski was paying close attention to this story when it aired on PBS in New Jersey. The whole thing began as a misunderstanding. The Earth ship on its way to establish contact with the Draconians had its communications disabled due to an ion storm. The Draconian ship was a battle cruiser, approaching with its gun ports open. General Williams was in command of the Earth vessel, and he assumed they were going to be attacked - so launched a preemptive strike. The Draconians had used a battle cruiser simply because this is how a noble of the court would travel, and open gun ports were a sign of respect. Replace Draconians with Minbari, and you can see how they match.
Doctor Who doesn't just take inspiration from other sources. Such a long-running show provides inspiration for others as well. 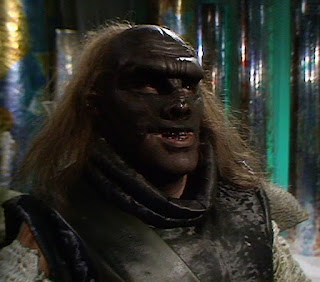 That the Daleks might be lurking somewhere in the background might have been guessed at by the inclusion of the Ogrons. They are being employed by the Master to carry out pirate raids on ships belonging to both Earth and Draconia. Inspired by his own personal hypnotic prowess, he has devised a machine which stimulates the fear centres of the brain - making people see that which they fear most. Strangely, this makes Jo see a spaceship she has never seen before turn into another spaceship, which she hasn't seen before either. It is also fortunate that the Earthmen and the Draconians fear each other so much, otherwise the spaceship crews might be reporting attacks by spiders, snakes, wide open spaces or clowns, to name just a few of the most common phobias.
Later, the Master tries his box of tricks on Jo, and she is able to withstand it - but not before she sees him turn into some of the aliens she has met recently (a Sea Devil, a Mutt and a Drashig). This is an element of the story arc / character development which Letts and Dicks succeed in threading through the entire Pertwee era. Jo was hypnotised by the Master on her very first meeting with him, and here she is standing up to him in what will prove to be their final encounter.
As it was, the Ogrons were a late replacement for the Cybermen. If you have a copy of Steve Cambden's book The Doctor's Affect, turn to Chapter 24 and you will see a VFX sketch which shows a Cyberman burning through a bulkhead door. This was drawn up for this story. The reason that they did not appear in the end was down to the costumes being found to be in a dreadful state in storage, and not the old insistence by Terry Nation that they should never appear in the same story as his Daleks. 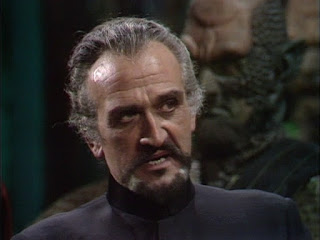 Talking of VFX, the Ogron eating monster was so bad that director Paul Bernard kept its appearance to an absolute minimum - a few brief glimpses on location. Removing it from the studio session would add to the appalling mess which is the conclusion to this story. First of all, the Draconian Prince and General Williams rapidly become best friends when the truth about the start of the last war is revealed. The Prince was on Earth for ages prior to this, but they never mentioned it then? One minute the Doctor is a dangerous spy and the next everyone is listening to him and believing his every word. The episode ending is then totally botched by Bernard. The director of the following story - David Maloney - went back and tried to salvage it, but it is still confused and unsatisfying. The Doctor is supposed to have made himself look like the Dalek leader, using the Master's hypnotic device, which causes the Ogrons to run off. The Doctor and Master have a scuffle, in which the Doctor is wounded. Jo takes him into the TARDIS. On screen, we don't see the Doctor turn into the Dalek, so the Ogrons seem to panic and run away for no real reason. There is a slight scuffle between the Doctor and the Master, but the latter then simply vanishes.
This is particularly annoying as, with hindsight, we know that this was to be Roger Delgado's final performance as the Master. He had already agreed to be killed off in the series as it was preventing him getting other work - people assuming he was working on the show full time rather than just the occasional story. As it was, Delgado went off to Turkey to make a movie and was killed in a car crash.
The link to the next half of the story is the Doctor asking the Time Lords for help in following the Daleks to their base...
Next time: Now That's What I Call Daleks! Or Terry's Old Gold...
Posted by GerryD at 23:07