Cybermen and Macra for DVD? 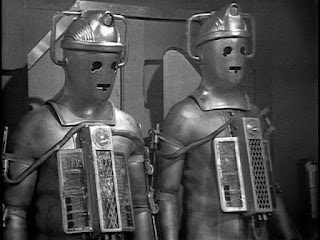 There is a rumour doing the rounds that The Wheel in Space and The Macra Terror are the next lost stories to get the animation treatment and find their way onto DVD.
This was reported in a UK tabloid (The Mirror) so the usual caution is advisable. However, Amazon in the US have listed the Cyberman story for a DVD release, available to preorder - no date given - which might just authenticate the newspaper report.
More caution, however. Not long ago a version of The Wheel in Space was made available for streaming - but it was just the soundtrack coupled with telesnaps covering the four missing episodes. Might this be what Amazon.com is talking about? Personally, I don't think I'd buy a DVD that was just telesnaps - no matter how much they tried to clean up the images.
The recent release of Tom Baker's first season as a Blu-ray box-set was accompanied by comments that the plan was to release all the seasons this way - which poses problems for Seasons 3 - 5, plus odd stories either side. If the BBC want to release all 26 seasons as fancy Blu-ray box-sets, they are going to have to go down the animation route eventually.
26 seasons, mind you. They could spend ages releasing the ones which are entire in the archives and not have to tackle the ones with lots of missing episodes for quite a while yet. Seasons 13 - 26 could be made ready fairly easily. As well as the lost Hartnell & Troughton stories, a lot of Pertwee material isn't quite up to HD standard (e.g. Ambassadors of Death, or Part One of Invasion of the Dinosaurs). And talking of dinosaurs, might they finally get round to replacing the puppet ones with CGI versions for a future Blu-ray release?
Posted by GerryD at 23:58