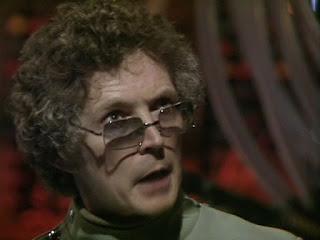 Mr Fibuli acted as chief officer and technical expert to the Captain, the ruler of the planet Zanak. One of his main responsibilities was to maintain the massive time-jump engines which allowed the hollow world to transport itself across space to envelope other planets so that they could be stripped of their mineral wealth. He was also tasked with devising a weapon to act against the Mentiads - psychic individuals whose numbers grew every time Zanak made a time jump. He was constantly bullied by the Captain, and threatened with execution, even though his expertise was invaluable to his leader's plans. He was able to devise a machine which used various crystals to block the Mentiads's psychic powers. The Doctor and Romana used the TARDIS to prevent the planet from making a jump to Earth, whilst K9 generated a counter signal which allowed the Mentiads to sabotage the engines. Fibuli was killed in the resulting explosion, and the Captain was heartbroken at his death.