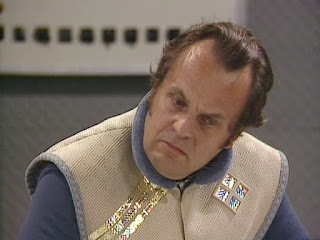 Fenner was the second-in-command on the methane refinery which had been set up on the third moon of Delta Magna - the Earth colony world which was his home. He had a dislike for the green-skinned native Delta Magnans who had been displaced to this satellite centuries before. When his colleague Dugeen discovered that a spacecraft had landed in the nearby swamps, Fenner and the refinery boss Thawn went out hunting for its occupant, fearing that it might be the notorious gun-runner Rhom-Dutt. They captured instead the Doctor, who had come here in search of the Fifth Segment of the Key to Time. Though he hated the "Swampies", he drew the line at exterminating them, as Thawn wished to do. After the refinery's activities woke up the slumbering giant squid Kroll, all of Fenner's crew mates were killed - Dugeen by Thawn. and Thawn himself by the Swampies - leaving him the sole survivor. The destruction of Kroll meant that the refinery programme would no longer be viable, so he was out of a job. The Doctor recommended that he get to know the natives whilst he waited for a rescue ship to arrive from Delta Magna.