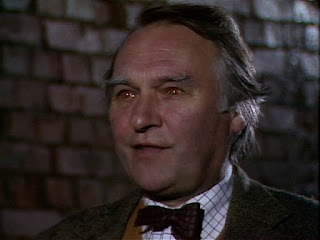 An ancient evil entity, which the Doctor claimed had existed since the beginning of the universe. In the 3rd Century AD, the Doctor came face to face with Fenric, who could inhabit other beings' bodies, in the middle of a desert. The two played chess together, the Doctor winning. Fenric's life-force was trapped in a flask. This later fell into the hands of traders, who carried it into Europe. Capable of influencing the outside world, Fenric created a time storm which brought the Ancient One back through time from the far distant future of Earth. This was a Haemovore, last of the race of amphibious vampires who would evolve out of the human race after the planet had been destroyed by toxic waste. The Ancient One followed the flask, spreading the vampire taint through the region. The flask eventually came into the possession of Viking traders, who brought it with them to the north east of England. Fenric was working on a plan that would lead to its release. It manipulated the blood-lines of the Viking settlers, so that some of their descendants would all come together at a point during the Second World War. The Doctor had already spotted Fenric's influence in recent events - including the unlikely circumstances surrounding his companion Ace's transportation to Iceworld, and an unfinished chess game in the study of the 17th Century sorceress Lady Peinforte. The various unwitting agents of Fenric's deliverance it called its "wolves".
At a top secret naval base in Northumbria, the flask was found bricked up in a cellar. The Ancient One and a number of other Haemovores were summoned to attack the base. Two of the "wolves" were the base commander, Millington, and Professor Judson, who had created a deciphering computer which he called the Ultima Machine. Ace befriended a Soviet commando officer who had been sent to steal the machine - Captain Sorin. The Ultima Machine decoded some ancient Viking runes, which proved to be the key to unlock Fenric's prison. It took over Judson's body.
The Doctor set a trap for him - another chess game. Once again, Fenric could not solve it. Fearing its new body too weak, it transferred to a younger, fitter one - Sorin's. He was another of the "wolves". 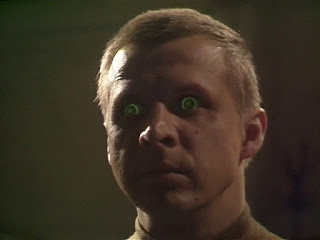 Ace had also made friends with one of the WRENs - Kathleen Dudman - who had a baby girl named Audrey. Ace doted on the child, but disliked the name as it was the same as her mother's. When the Haemovores attacked, Ace sent Kathleen and the baby to her grandmother's address in south London. She then inadvertently gave Fenric the clue to beating the Doctor's chess puzzle when she saw that the British and Soviet soldiers were working together. The chess game could be won if the black and white pawns worked together. She told Sorin this, not realising he was the new host for Fenric. Fenric told Ace that she was also one of its "wolves". The baby would grow up to become the mother she despised, and it had been manipulating her ever since it sent her to Iceworld to meet the Doctor.
The base was full of weapons containing a highly toxic substance. Fenric ordered the Ancient One to release this into the oceans. The Doctor convinced the Ancient One that this would create the very world which had spawned it. Ace's faith in the Doctor prevented the creature from taking any action, but when he attacked that faith, it seized Fenric and forced it into a sealed chamber where Sorin's body was destroyed by the toxin. Fenric appeared to perish, as it had no other body to transfer into, though it may simply have been banished to some shadow dimension.