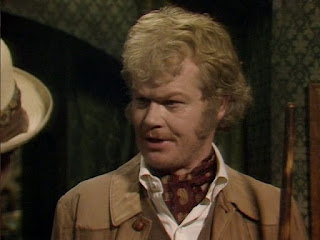 Redvers Fenn-Cooper was a well known explorer and big game hunter, who traveled extensively in Africa. One day he had come upon a spaceship belonging to the alien entity known as Light. The experience had driven him temporarily insane. The ship had been carrying out a survey of all lifeforms in the universe. Two alien creatures were employed to carry out the survey - one that would go out and interact with the environment and evolve to mimic the dominant lifeform, whilst the other would remain aboard the ship unchanged to act as a control specimen. The survey unit had the spaceship transported to Gabriel Chase, a house in Victorian Perivale, where he took over the household of a Mr Pritchard. He assumed the persona of the gentleman Josiah Samuel Smith. Seeking to elevate himself further, he hatched a plan to assassinate Queen Victoria and take over the British Empire. Fenn-Cooper had an invite to Buckingham Palace, and Smith had brainwashed him into wanting to kill the monarch. The control specimen managed to escape, and rapidly evolved into a young woman. Fenn-Cooper found himself falling in love with her, and decided to take her to the Palace instead of Smith. Once Smith had been overpowered, and Light destroyed, Fenn-Cooper decided to explore the cosmos with Control in Light's spaceship.