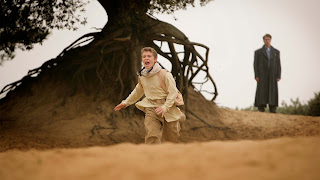 In which Gwen Cooper arrives late for work one day, following a romantic break in Paris with Rhys, and is shocked to see a stranger sitting in the Hub. Her colleagues treat him as though he is usually there. The young man touches her on the shoulder, and she suddenly recalls that he is Adam, part of the team. She no longer notices that her friends have changed somewhat. Owen is gauche and awkward, whilst Tosh is more confident and outgoing. Adam begins to alter the Hub's computer database, adding information about himself. When challenged by Tosh he begins flirting with her, which makes Owen jealous. Alone in the cell area, Jack has a fleeting vision of a boy.
When Gwen gets home she finds an intruder in her flat. She overpowers him and calls on the team for assistance. They arrive and discover that she has captured Rhys, whom she seems not to know. This is put down to some form of temporary amnesia on Gwen's part. Adam is really an alien, who can manipulate memory. He can implant false memories through touch, but in Gwen's case he had accidentally forced out genuine memories of her fiance. 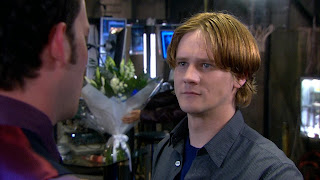 Whilst hunting Weevils in the sewers, Jack finds Adam has joined him. He makes Jack think that he invited him along, and also that he had recruited him as he felt he was someone in whom he could confide. Jack then tells him of his childhood in the Boeshane Peninsula. His family were attacked by savage creatures which killed his father and abducted his younger brother, Gray. He has always felt guilty, blaming himself for failing to keep Gray safe. Back at the Hub, the team have been investigating a strange box. Tosh claims that Adam had found it, but Ianto is sure that it was Jack who discovered it. He checks his diary, and is disturbed to find no mention of Adam anywhere in its pages. Adam has seen this. When Ianto challenges him, Adam plants false memories in his mind - memories of him murdering a number of women. 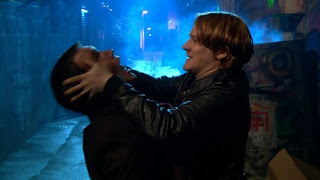 Jack returns to find Ianto distressed - asking to be locked up. When he admits to the murders Jack refuses to believe him. He checks the CCTV and observes Adam planting false memories amongst the team. The computers are checked and it is discovered that all data about Adam is only 24 hours old. On his return to the Hub, Adam is captured and forced to enter one of the cells. Here he admits his alien nature. He is the last of his kind, and can only exist if people remember him. Jack helps his colleagues recall their true memories, then has them all take an amnesia pill - which will erase the last 24 hours, and make them sleep for another 24. He goes alone to the cells where Adam pleads for existence. He shows Jack happy memories of his childhood, before his father was killed and Gray taken. Adam then tries to incorporate himself into these memories, spoiling them. Jack takes his pill - and Adam fades from existence. The following day, the team all awake to find they have lost 48 hours. They find the box - which had once contained Adam's essence. It is tagged with his name, but they have no idea who he is. Inside the box Jack finds only a few grains of sand... 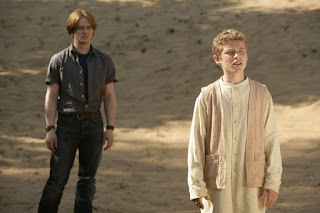 Adam was written by Catherine Tregenna, and was first broadcast on 13th February, 2008.
This was Tregenna's final script for Torchwood. Her next foray into the Doctor Who universe would be The Woman Who Lived in 2015.
We see an alien planet for the first - and only - time in the series. As the story is about memory, it allows us some insight into Jack's history. He is seen as a teenage boy, living with his family in the 51st Century. We know from Last of the Time Lords that Jack came from the Boeshane Peninsula, as he told the Doctor and Martha that when he became the poster boy for the Time Agency he was nicknamed "The Face of Boe".
Mention of Gray's name had disturbed Jack when Captain John Hart had spoken it in the season opener, and here we discover that it refers to his brother. Jack has suppressed memories of him for 150 years due to his guilt. 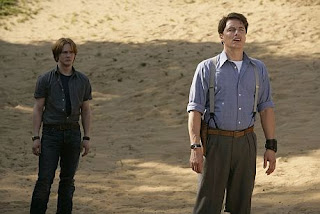 Adam's ability to manipulate memories allows the regulars to play against type. Owen and Tosh basically switch personalities - he becoming a bit of a nerd whilst she becomes more assertive and sexualised. Ianto tends to not even get to leave the Hub on missions, delivering fine quips with his fine coffee, but this story provides Gareth David-Lloyd with the opportunity to impress with his acting skills. He is totally traumatised by the memories of being a sadistic killer, driven to almost suicidal despair.
The main guest artist is Bryan Dick, who plays Adam. You can judge how well he performs by the fact that you actually feel sorry for him when Adam is destroyed, despite the horrible things he has done to the team. Jack's parents are Dimitri Goritsas and Lauren Ward, whilst the younger Jack is played by Jack Montgomery.
Overall, another strong episode, which manages to share out some good roles for the whole team.
Things you might like to know: