Power of the Daleks DVD 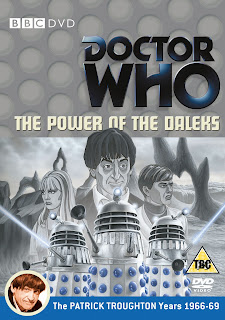 After the shameful disregard shown to the last Doctor Who DVD release - The Underwater Menace - we have now been promised a wealth of extra material for the forthcoming animated Power of the Daleks. As well as a commentary track, you can also watch the story in telesnap form with soundtrack as well as the new animated episodes. There will be three different versions of the soundtrack, a making-of documentary, animation tests, plus some of the original Dalek voice recordings made at Maida Vale back in 1966. The DVD will have a booklet written by archivist Andrew Pixley.
If this sells well - either when it appears on-line in BBC Shop from 5th November, or when the DVD hits the shops a couple of weeks later, there is every possibility that other lost stories might get the animated treatment - presumably starting with Dalek stories. (Evil of the Daleks is the obvious candidate).
As I am going to be buying the DVD anyway, I will be prepared to wait that extra couple of weeks and will forego purchasing it on-line. We've waited decades for this. Two more weeks won't make much difference.
Posted by GerryD at 22:07