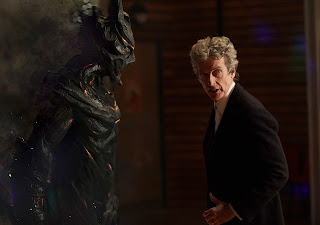 The first two episodes of Class have just been screened on BBC3. I just watched them courtesy of the BBC i-player service, where you can also view a number of behind the scenes videos.
Don't read this if you have yet to get the series where you live. Shhh - spoilers!

First of all, is it any good? I would say definitely yes - so no worries there then. The first episode - For Tonight We Might Die - sets the scene, introduces the characters, and links the show to its parent series.
The setting is what used to be Coal Hill School in Shoreditch, London - now upgraded to Academy status. This is where Ian Chesterton and Barbara Wright used to work, and where the Doctor's granddaughter Susan was once a pupil. Later, it would be used as a base of operations by the Daleks, seeking the Hand of Omega. Ian Chesterton would go on to become one of the school governors, and Clara Oswald and Danny Pink would teach there. The latter two characters get an on screen reference, as the Doctor sees their names inscribed on a wall in a roll of honour. And of course the Doctor was briefly the caretaker at the school.
Another link to the parent series is the inclusion of head teacher Mr Armitage, who we first saw in a couple of Series 8 stories. 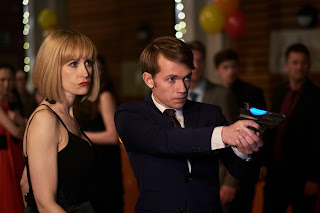 The basic set up is that all of the above alien activity has weakened space / time, and so there is a Cardiff-style rift in the area. The Doctor should have thought about that before placing a couple of alien refugees there. Or maybe he did. It's clear that Charlie is going to be an alien from the start, as he takes everything people say so literally, and doesn't know who Idris Elba is. He's the latest Unearthly Child to be schooled at Coal Hill. Turns out he's an alien prince, from the planet of the Preppies. Miss Quill comes from the same world. She was a freedom fighter / terrorist who has been linked to Charlie via some parasitical creature. As punishment for her crimes / freedom fighting activities, she must now protect him. She can only fight if his life is threatened, and can't use weapons. Charlie's planet was destroyed by the demonic Shadow Kin, and he and Miss Quill were rescued by the Doctor (possibly in his Ninth incarnation, judging from the musical score). The Shadow Kin have now used the tear in space / time to find Charlie. He makes friends of sorts with three other pupils - April, who can't get a date for the prom; Tanya, who is younger than her peers and has a rather domineering mother: and Ram, who is the star football player and is a bit of an arrogant lad. As well as Tanya's mother, we get to meet April's, who is confined to a wheelchair, and Ram's father - who at first looks like he is going to be the pushy dad, but who we see in a different light once Ram has shown him his alien artificial leg. Yes, we'll come to that. 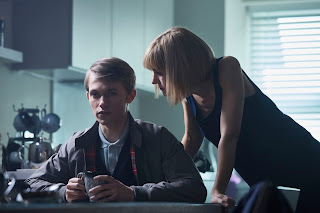 The Shadow Kin attack the school during the Prom. Ram's prom-date gets skewered. He loses his leg. April loses her heart to the Shadow Kin king. The Doctor turns up after Quill calls him and the Shadow Kin get sent packing - threatening the usual "you haven't seen the last of us" bit. The Doctor then tasks the youngsters and Quill to protect against whatever might drop through the tear.
One of these is an alien dragon, as we see in the second episode - The Coach With The Dragon Tattoo. No guesses where that title came from.
Ram's struggling to come to terms with both his new leg, that won't kick a ball straight, and his girlfriend getting skewered by aliens. Understandable, I would have thought. Instead of paling up with the others, he goes all moody on his own. That's until he learns that they have also seen a flesh flaying dragon, which looks just like the tattoo on his football coach. Sadly, Mr Armitage is one of the victims, so doesn't make it beyond the second episode.
The gore factor is high. Poor Ram gets drenched in blood two weeks running as well as getting his leg severed, and we get brief glimpses of skinned corpses. Diversity-wise, all the boxes are ticked. Ethnically diverse characters, someone in a wheelchair, and Charlie has a boyfriend. Personally I thought that the tick boxing was a bit too blatant. Tanya bonds with Ram because they are both non-white. That would be all very well if they were the only non-white people in the school, but this is Shoreditch we are talking about for goodness sake. 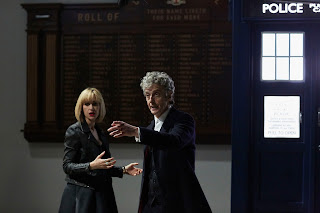 The highlight of the show is Kathrine Kelly's Miss Quill. She gets all the best lines. She's permanently passive-aggressive, when not being just downright rude and condescending, and I love her. The second episode deals mainly with Ram and Tanya, but Quill gets a personal duel with an enigmatic OFSTED inspector who she just doesn't trust. With good reason, as it turns out he's an android belonging to some outfit called The Governors. This will obviously play out later, as will there be a return of the Shadow Kin, as their king and April share a heart. Don't ask.
It also looks like Charlie's race might not necessarily be doomed to oblivion after all, as he has a box known as the Cabinet of Souls, that might just turn out to be some sort of race bank.
Overall, a cracking good start to the latest spin-off series. One always worries with Young Adult material that it will alienate those younger and older than the target audience. Personally, I have always felt that Young Adults are the only ones totally uninterested in YA-targeted books / films. Older and younger people tend to be the ones who lap them up most. YA's are too busy off doing YA things.
I am well over the YA age limit, but will certainly be logging on for the next 6 weeks.
Best line so far: "He's from OFSTED. Of course he's evil."
Also loved the Doctor's expressed love of darts - the perfect combination of mathematics and heavy alcohol consumption.
Posted by GerryD at 22:32