A is for... Arwell Family 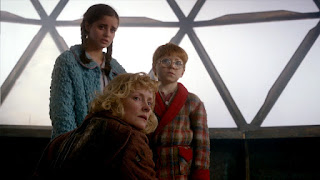 On the eve of the Second World War, the Doctor met Madge Arwell after plunging to Earth wearing an alien impact suit. He had just escaped from an exploding spaceship, which had been about to attack the Earth. Madge helped him get back to the TARDIS.
Three years later Madge learned that her husband Reg, a bomber pilot in the RAF, was missing, presumed dead. His Lancaster bomber had failed to return from a mission. With Christmas fast approaching, Madge elected not to tell her two children - Lily and young Cyril. They would have one last happy Christmas together.
She received an invitation to evacuate and stay with Uncle Digby. He was not at home, but they were greeted by an eccentric caretaker - really the Eleventh Doctor. Madge had never seen his face, owing to the impact suit being on back to front. He wanted to say thank you to her for her help.
The Doctor had one special present for the family - a large blue box. The ever inquisitive Cyril sneaked downstairs on Christmas Eve and opened the box. It contained a portal to an alien planet - a snowbound forest world. Lily and the Doctor followed in order to find him. They encountered a wooden King and Queen in a massive tower. Finding her family missing, Madge followed them, and she encountered a team of loggers from Androzani Major. They were about to harvest the forest using acid rain. The trees actually contained alien intelligences, who had created the King and Queen in order to transport them to safety. Madge rejoined her children in the tower, atop which was a travel capsule. Madge piloted it off the planet by mental power. Her desire to see her husband once more brought them back to Earth, and the capsule was seen by Reg in his bomber - providing a means of guiding the aircraft back home. When Madge, Lily and Cyril emerged from the capsule, they were back at Uncle Digby's house - and Reg had landed nearby.
Madge talked the Doctor into going to visit Amy and Rory at home for Christmas, as he had not seen the for a couple of years. 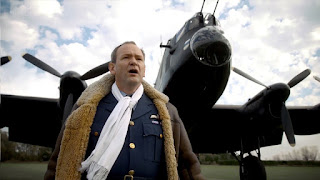