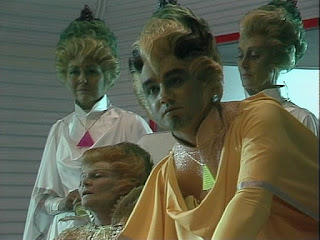 A highly advanced race from the planet Argolis. They had evolved from plant-life. In the mid 23rd Century they went to war with the reptilian Foamasi. The war lasted mere minutes, but Argolis was blasted with deadly radiation. This rendered the race sterile. In order to fund research into their plight, and to foster peaceful relations between alien races, the Argolins set up the Leisure Hive. This entertainments complex used the science of Tachyonics to create its attractions. Argolins have long life spans, but when they are dying the process is very rapid. Seed-like pods on their craniums drop off as they die. The son of leader Morix was Pangol. His existence surprised everyone, as he appeared to have been born after the war. His mother, Mena, revealed that he was created by the Recreation Generator - from genetic material belonging to the whole race. Pangol harboured ambitions to turn Argolis into a military super-power once more. He planned to recreate himself to form a huge army. Unfortunately for him, the Doctor had sneaked into the Generator, and it was he who was copied. Re-entering the Generator with his dying mother, Pangol was regressed into a baby - whilst Mena was rejuvenated. The Argolin race would survive by rejuvenation, giving them the time needed to cure their sterility.
A female Argolin was one of the visitors to the Iceworld complex, visited by the Seventh Doctor and Mel.