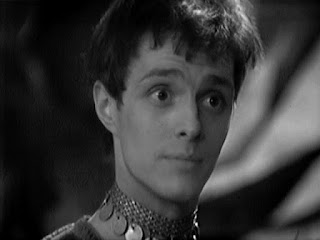 The First Doctor and his companions Ian, Barbara and Susan met Altos in the city of Morphoton - the first stop on their quest to locate the Keys of the Conscience machine on Marinus. He promised the travelers that he could give them anything their hearts desired. When Barbara failed to be hypnotised by the creatures which ruled the city, she saw that the young man was really dressed in rags, and what he promised them was worthless. Altos captured her and took her to the brain-like Morpho creatures, but she was able to smash their protective domes - freeing all their mental slaves. It transpired that Altos had also been sent by the Keeper of the Conscience - Arbitan - in search of the Keys, but he had become ensnared here, along with Arbitan's daughter Sabetha, whom he loved. Altos and Sabetha then joined the TARDIS crew to help locate the other Keys.
He fell foul of the evil fur-trapper Vasor, who left him tied up on a snowy mountainside to freeze to death. He was rescued by Ian. In the city of Millennius he learned of the death of his friend Eprin, another of Arbitan's agents. Ian was charged with his murder, and Altos helped the Doctor to free him and expose the real killer.
Back on the island of the Conscience machine, the Voord leader Yartek exploited Sabetha's love for Altos to force her to reveal that the TARDIS crew had the Keys.
After the Voord had been defeated, and the Conscience destroyed, Altos and Sabetha elected to start a new life in Millennius.