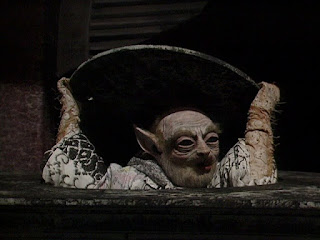 A race of small rodent-like bipeds who lived in the tunnels beneath the Earth colony on Terra Alpha. They were the planet's indigenous species, forced underground by the coming of the humans. They used the sugar-carrying pipes to travel around - and so became known as the Pipe People. The ones encountered by the Seventh Doctor and Ace had names suggestive of old Saxon - Wences and Wulfric. They joined forces with the Doctor and helped him lead a revolution that saw the overthrow of the planet's tyrannical leader, Helen A. The Pipe People used the equipment in the Kandy Kitchen to flood the pipes and so destroy the Kandyman.